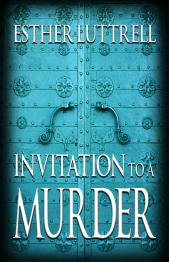 Join us in Marvin Auditorium on Satruday, December 12, 1-4 pm to meet over 50 Kansas authors, including Esther Luttrell, at Great Writers, Right Here.

In Invitation to a Murder when Doug Stafford phoned in the dead of the night from Topeka, Kansas, Dena Brooke was sitting in her Florida beach cottage, trying to decide what to do with the rest of her life. Suddenly, it was decided for her. Fate intervened with the murder of Doug and Ginny’s handsome young son. Ginny needed Dena to be with her in her terrible time of grief. A drive-by shooting, according to the police report. A random bullet fired on a foggy, pre-dawn morning. But, if it were random, why did Dena find herself stalked and terrorized? What did the Paxico cowboy know that he wasn’t telling? And what about the eccentric cousin in the sprawling old B&B? What secrets were they keeping from the family that catapulted Dena into the middle of danger? As Ginny totters on the brink of insanity, Dena knows it is up to her to find a killer before the killer finds her. Would the answer lie behind a forbidden blue door in a Kansas City alley?

Esther Luttrell moved to Topeka in 2003 to be near her daughter after a long film and writing career in Los Angeles. She wrote screenplays and gave screenwriting workshops around the country until coming here, where she wrote her first novel, Murder in the Movies. It was released in 2005 by a publisher who went out of business in 2008. Within a week another publisher obtained hardback rights and the book came out a few months after that.  Harlequin World Wide Mysteries picked up paperback rights, and her current publisher released it under their own logo in June 2013. So, it has never been out of print. Invitation to a Murder, is set in Topeka and uses real names of real people and real places; her Valentine to a city she’s come to love.

Books available for sale & signing from 1-4 pm on December 12 in Marvin Auditorium.

*Book and Biographical information supplied by the author.

Charity is a Public Service Specialist working with genealogy and local history reference in the Topeka Room/Genealogy. Her start at TSCPL came as a genealogy researcher soon after the Baker Genealogy Center opened in November 2007. In early 2009, she became a Genealogy volunteer and in May 2010 she came to work at TSCPL. She earned her Master of Library Science degree from Emporia State University in December 2011. One of her favorite times of year is when the Topeka Room is decked out for the holidays.