Novelist Sandra Moran has deep roots in the Sunflower State. A sixth-generation Kansan, Moran spent much of her childhood outdoors, growing up in a place where families had known each other for generations.

“It’s not an exaggeration to say that growing up in a small town (Dover) just outside of the Flint Hills has significantly influenced my writing,” Moran said. “In many ways, I was raised by a village in that everyone knew who I was and what I was up to. I was surrounded by honest, kind people who were grounded and humble. That sensibility, straightforwardness and authenticity can be found many of my characters – at least I hope so.”

This reader agrees! Moran writes about real, flawed people who face challenges in their lives. Moran notes that we’re all flawed in some way—plus it makes the characters more fun to write about.

“The bit that’s fun to explore is what we do to overcome these flaws – or better yet, how we learn to live with them,” Moran said. 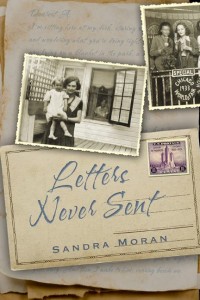 Moran’s interest in anthropology has led her to explore gender roles, and how women’s lives are shaped by the expectations of their culture. Her research really shines in the novel Letters Never Sent. The story shows just how much a woman’s life could change from one decade to the next, depending on what opportunities or limitations she encountered in her society, and how she chose to respond.

Moran writes stories that feature gay and lesbian characters in prominent roles, which is still not particularly common in Kansas literature. Moran notes that she wants to write work that reflects her reality and her roots.

“I don’t know as I see myself as a voice for the LGBT community,” Moran said, “but it IS my goal to write stories that include gay and lesbian characters – particularly in historical fiction. As a lesbian, I think it’s important to have characters who reflect who I am and the experiences of the women who came before me. And, as the LGBTQI community becomes more accepted within mainstream culture (another, very fascinating cultural shift), I think it’s key that our stories become woven into the fabric of the mainstream narrative.”

Moran is a charming and entertaining podcast guest. Check out episode #75 of our library’s HUSH Podcast to for a great conversation on writing, gender roles, and more.

You can check out Sandra Moran’s novels All We Lack, Nudge, and Letters Never Sent from your library!

You’re a native Kansan. How has the culture and landscape of Kansas influenced your writing?

It’s not an exaggeration to say that growing up in a small town (Dover) just outside of the Flint Hills has significantly influenced my writing. I am a sixth generation Kansan and I grew up playing “in the country.” I was one of the last generations of children who grew up before computers, cell phones and social media. We played outside, rode our banana-seat bikes all around town and built forts out of discarded wood. In many ways, I was raised by a village in that everyone knew who I was and what I was up to. I was surrounded by honest, kind people who were grounded and humble. That sensibility, straightforwardness and authenticity can be found many of my characters – at least I hope so.

I loved your 2013 novel Letters Never Sent. It’s a great story with real, rounded characters. Do you remember what sparked the idea?

I originally envisioned a young adult book in which a student has to keep a journal of her innermost thoughts as part of a school assignment. The teacher promised not to read the contents, but rather to just make sure that the students were journaling. The main character, a girl, was having a very hard time and at first, was resistant to the idea of committing her deepest feelings to paper, but then finds it to be cathartic and ultimately life-saving. The twist was that we find out in the end that the teacher was her mother and that ultimately, the girl, Jamie, had to trust and be vulnerable on a number of levels. That story, though, got me to thinking about what we write down and what we don’t. And then I began to think about all the letters we write over the course of our lives, but either can’t or don’t send. What if those letters were kept and then later, after we were gone, read? What truths do we tell when we think no one will ever read them?

You teach anthropology, with a special interest in cultural gender roles. How did your background and research play in a part in the writing of LNS?

My background in anthropology played a huge role in my research and the construction of Letters Never Sent. I teach a section in my cultural anthropology class on Sex and Gender. We spend a fair amount of time discussing how society places expectations on people based on their biological sex. But what is most interesting is that those expectations change based on all sorts of things – everything from changes in the cultural paradigm to economics and warfare. A perfect example can be seen for women in the United States during the 20th Century. In the first part of the century, you see women stepping onto the public stage – first for issues and later, for themselves and the right to vote. Then in the 1920s, you see the emergence of women who are bold and audacious – women who get jobs, make their own money and are independent. As a result, they have a very different relationship with men. If they don’t have to marry for money and security, it changes the dynamic. But then the Stock Market crashed, the Depression hit and jobs were scarce. Women moved back into the home so the men could work. And then in the 1940s, the U.S. entered World War II and women were recruited back into the workforce – this time, in jobs much more varied than as secretaries, nurses, and teachers. But then, after the war ended, the men came home and wanted their jobs back. Women moved back into the home – and often those homes were in the suburbs. I could go on, but I find these changes in the cultural construct as they pertain to women, fascinating.

You write about flawed characters; people who are struggling and growing. Why do you think it’s so important to represent your characters as flawed human beings?

I think it’s important to represent my characters as flawed human beings because … well, first, it’s much more interesting than if they were perfect. And secondly, I think that each of us, in our own way, is flawed. The bit that’s fun to explore is what we do to overcome these flaws – or better yet, how we learn to live with them.

Do you do a lot of planning (notes/charts/character bios) for your novels, or do you just jump right in after the research is done?

I do a great deal of researching, character building and outlining before I even begin to write. I generally have a pretty good idea of the story when I start researching the time period or the subject. Then I take that information and use it to build characters. I create fairly extensive biographies for each of them, even if I know the information won’t make it into the story. Knowing their likes, dislikes, personalities, etc., allows me to understand how they would react to a particular situation or why they make the decisions they do. Then, I begin the outline. It’s often fairly extensive. As I outline, I make note of what I need to research further and incorporate maps, photographs and anything that will help clarify the setting. I usually do this part with a timeline of world and local events that help shape and inform the cultural climate. Once I have that, I go back to the beginning and incorporate aspects of the story that help strengthen the path to the conclusion of the story. I then go through the outline a final time to fill in the gaps and to insert the information I noted previously that needed to be researched.

Then, when the story is clear in my head, I start at the beginning and write sequentially to the end.

You told me that you’re researching the Harvey Girls…can you tell us a bit about the novel that you’re working on?

The working title is Extraordinary Ordinary Girls and it’s the story of five women who are working as Harvey Girls. Though the story is set in Topeka, Kansas City and Albuquerque during the late 1920s, the characters also spend time in their Midwestern home towns. Like Letters Never Sent, this new novel follows these women as they navigate the changing cultural paradigms of women’s gender roles. The story is told through the eyes of 19-year-old Sarah “Sadie” Lewis, who just lost her job at a downtown Topeka dime store because the owner had to employ his sister-in-law. She had been there only two weeks and had no idea what to do. Her dream was to be a reporter like her hero, Nellie Bly, who died four years earlier. She had left her hometown of Butler, Missouri against her parent’s wishes, so going back in defeat was not an option.

An acquaintance suggests she consider the Fred Harvey Company so she sends a letter, is interviewed by Alice Steel, and sent back to Topeka for her training. There, she meets Celia Warren, the 28-year-old head waitress; Martha Hind, a 16-year-old orphan from Keene, Kansas, who lied about her age to get hired; Emily Sinclair, a 19-year-old from Stillwell, Oklahoma, who is working to send money back to her family. Later, in Kansas City, she meets Josephine, Meade, a 23-year-old St. Louis native who applied with her friend, Mae, on a lark.

Your books include gay and lesbian characters in prominent roles, which is still not common in works by Kansas authors. Do you see yourself as a voice for the LGBT community? Is speaking for that community through fiction valuable?

I don’t know as I see myself as a voice for the LGBT community, but it IS my goal to write stories that include gay and lesbian characters – particularly in historical fiction. As a lesbian, I think it’s important to have characters who reflect who I am and the experiences of the women who came before me. And, as the LGBTQI community becomes more accepted within mainstream culture (another, very fascinating cultural shift), I think it’s key that our stories become woven into the fabric of the mainstream narrative.

How can readers get in touch with you? What’s the best way to follow your work?

I can be reached at Moran.Sandra.D@gmail.com or through my website at www.sandramoran.com. There, you can also see a schedule of my upcoming events and presentations, and read excerpts from each of my novels.

Sandra Moran is an author and assistant adjunct professor of anthropology at Johnson County Community College in Overland Park, Kansas.

A native Kansan, she has worked professionally as a newspaper journalist, a political speech writer, and an archaeological tour manager. In her novels, she strives to create flawed characters struggling to find themselves within the cultural constructs of gender, religion and sexuality.