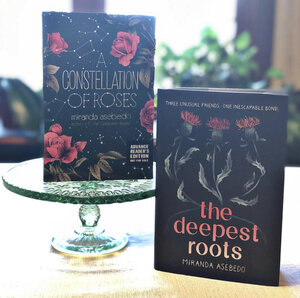 Welcome to Miranda Asebedo’s Kansas, where magic runs in families and some girls are born with special talents. Read Asebedo’s books The Deepest Roots and A Constellation of Roses for strong female leads, friendship, family and belonging, with a touch of magic. These stories are both set in the same world. However, they are companion books rather than a series so you can read either first with no worry about spoilers. Asebedo’s books are written for teens, but I recommend both for adults as well.

Tales with a touch of magic

The Deepest Roots follows three best friends – Rome, Lux and Mercy. Each has her own struggles their powers can’t quite ease. After a tornado blows through town, the girls discover a diary that spells out the deathbed wish of a woman who couldn’t survive in Cottonwood Hollow. She wishes strength to the girls who would be born after her death and solidarity between women. The diary then describes a hidden treasure that should only belong to a daughter of Cottonwood Hollow. As they race for the treasure the girls depend on each other to survive.

In A Constellation of Roses Asebedo spins another tale of magical girls, and the power of love, friendship, and second chances. Trix McCabe has a gift for theft. She can pick a pocket in moments, without anyone noticing what she’s doing. After her mother leaves to buy a pack of cigarettes and doesn’t come back, Trix runs from one foster home after another. She’s finally sent to a small town to live with an aunt she didn’t know she had. In Rocksaw, Kansas, Trix discovers the McCabe women all have a gift. Her aunt bakes pies that affect the way people feel and her cousin can see someone’s darkest secret with only a touch. In a farmhouse filled with family, Trix might finally find a place to put down roots.

Asebedo’s characters were inspired by real life women from her childhood who always found a way to make things work. As she wrote her first novel and the characters took shape, that everyday strength and savvy evolved into magic. In A Constellation of Roses, Asebedo considered more problematic gifts.

“I wanted to explore that idea of women with magical powers more fully, especially magic that could be considered ‘bad,’ like Trix’s gift for thievery or Ember’s gift for reading people’s darkest secrets,” Asebedo said.

“Mercy’s mom in The Deepest Roots reminds me a lot of my own mom!” said Asebedo. “She also loves to feed a crowd and her specialty is oatmeal chocolate chip cookies. Auntie in A Constellation of Roses is definitely an amalgamation of my dozens of great-aunts growing up. In The Deepest Roots, I chose powers for each character that would sometimes feel like a burden, and that made sense as something that the original daughter of Cottonwood Hollow would have wanted for her descendants.”

Asebedo has a group of other writers who critique her work along the way. She said this gives her an outside perspective.

“If you’re interested in writing, I recommend finding some other writers to exchange work with,” said Asebedo. “It can make your writing stronger to get a second opinion, and it can also help you to learn to spot plot holes or issues in someone else’s writing so that you don’t make the same mistake.”

Before Asebedo became a full-time writer, she taught English to young international students. Her favorite part was hearing their stories and helping them find their voice. Asebedo is excited to host a Teen Writers Workshop with the library focused on voice and characters on Sept 18. She welcomes writers of all levels to join in the fun. Asebedo will also join us for an all-ages chat with readers on Oct 14. Bring your questions about the books or writing, and geek out with other readers.

Read on for our full interview with Asebedo. 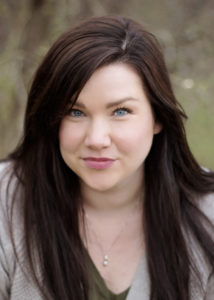 You’ve said your characters were inspired by strong, Kansas women who sometimes seemed to nearly make magic happen. Why did you choose to represent those powers as magic in your books?

I wanted to show how ordinary people could be extraordinary, and that evolved into magic as the ideas for the books took shape. After I wrote The Deepest Roots, I wanted to explore that idea of women with magical powers more fully, especially magic that could be considered “bad,” like Trix’s gift for thievery or Ember’s gift for reading people’s darkest secrets in A Constellation of Roses. But most of all, I really enjoyed throwing magic into the “real world” and seeing what happened!

You were a teacher before you became a full-time writer. What did you love about teaching?

I absolutely loved getting to know my students and hearing their stories. I used to teach English to international students who were here to study in a university, so I worked with students from all parts of the world. Every student I met had a unique life experience and perspective, and it was wonderful when we got to share those things with each other. I taught a lot of writing and reading classes, too, so it was fun to share some of my favorite YA books with students (Hunger Games was always a hit!), as well as help them find their voices as writers.

In your upcoming workshop for the library you’ll focus on voice in writing and character creation. How have you developed your voice as a writer? Are there exercises you’re personally fond of to help you create or develop your characters?

It takes a long time to figure out your voice as a writer, and unfortunately, in my experience, the only way to do it is by trying all the wrong things first! It really comes down to writing as much as possible and figuring out what the most authentic voice is for you. When I’m working on creating a developed character, I always start by asking myself these three questions:

For example, Trix in A Constellation of Roses is most afraid of being abandoned, and you can see the way this affects her decision-making throughout the story. Rather than wait for people to leave her, she always tries to do the leaving first. She also tries not to get too attached to others. She’s most interested in art, especially drawing/sketching, and you can see this in the way that she describes the world around her. She pays attention to things like light, darkness, and color in a way that other characters don’t.

Related: Are any of your characters inspired by real people? How did you choose which powers each character would have?

Mercy’s mom in The Deepest Roots reminds me a lot of my own mom! She also loves to feed a crowd and her specialty is oatmeal chocolate chip cookies. Auntie in A Constellation of Roses is definitely an amalgamation of my dozens of great-aunts growing up. In The Deepest Roots, I chose powers for each character that would sometimes feel like a burden, and that made sense as something that the original daughter of Cottonwood Hollow would have wanted for her descendants.

Absolutely, the pandemic has affected me as a writer. For one, I’m now homeschooling my kids, so my writing time has drastically shrunk, and I’m reminded of my very early days of writing while teaching full time. It’s all about being productive in short amounts of time. So a first draft that might have taken me weeks to write pre-pandemic now takes me months. But that’s okay! Writing is writing, whether it’s fast or slow.

As a reader, I went through a big reading slump for a while. Since then, I find myself mostly drawn to books with happy ever afters. And for some reason, I’ve found it a lot harder to get into fantasy novels, so it’s been mostly contemporary reads for me.

Do you workshop or network with other writers when you’re writing or polishing your work? How can other writers help us make our work stronger?

Absolutely! I have a critique group who reads my work after I’ve finished a first draft and a polish. Other writers can give great outside perspective. For example, my critique group recently pointed out that I have too much exposition in the first act of my work in progress and it slows the story down.  When I went back to look at those chapters, I realized they were 100 percent right.

If you’re interested in writing, I recommend finding some other writers to exchange work with. It can make your writing stronger to get a second opinion, and it can also help you to learn to spot plot holes or issues in someone else’s writing so that you don’t make the same mistake. (Like too much exposition!)

Can you tell us a little about your work in progress?

I can only tell you that it is light and fluffy because I think we all need some HEA [happily ever after] feels right now!

Read any good books lately? Suggestions, please! 😊 We’d love to hear about some of your favorite reads from the last couple of years.

By The Book by Amanda Sellet (funny and smart!)

Soulswift by Megan Bannen (YA fantasy with a slowburn romance, but read with tissues!)

On the adult side, I really enjoyed Kristin Hannah’s The Great Alone (mother-daughter drama in the wilderness of Alaska!) and Emily Henry’s Beach Read (writers swapping genres!)

Miranda Asebedo was born and raised in rural Kansas with a love of fast cars, open skies, and books. She carried that love of books to college, where she got her B.A. and M.A. in English, with an emphasis in Creative Writing and Literature. A Seaton Fellowship recipient, her short fiction has appeared in Kansas Voices, Touchstone, and Midway Journal.

Miranda still lives on the prairie today with her husband, two kids, and two majestic bulldogs named Princess Jellybean and Captain Jack Wobbles. If Miranda’s not writing or reading, she’s most likely convinced everyone to load up in the family muscle car and hit the road. Learn more about her work.