The Alice C. Sabatini Gallery will soon look like Topeka’s fourth skate park complete with its own version of a half-pipe. It’s all in honor of Ramp It Up: Skateboard Culture in Native America, a Smithsonian exhibit, which takes us outside the local skate scene and deep into Native American culture. This is the gallery’s 12th annual art exhibit for children, so teens and kids are asked to bring in parents and grandparents to show off this art form.

Be amazed by the art on 20 skate decks, including examples from Native companies and contemporary artists such as Pawnee/Yakama Bunky Echo-Hawk. View images and video of skateboard history and of Native skaters like the 4-Wheel Warpony skate crew.

Local skater and DJ Fraktul gets the party started with music during the Opening Reception on June 28 from 11am-2pm.

“We recognize the sport is intergenerational. Ramp It Up will bring back memories and also connect families and friends in unexpected ways,” said Heather Kearns, exhibit coordinator. “This seemingly simple activity has interesting broader applications in areas such as fashion, language, education and the formation of niche groups inside America’s diverse Native cultures.”

Skateboarding is one of the most popular sports on Indian reservations and has inspired and influenced American Indian communities since the ‘60s. Ramp It Up examines the role of indigenous peoples in skateboarding culture, its roots in Hawaiian surfing and the visionary achievements of contemporary Native skaters. The exhibition features the work of visual artists and athletes from the following tribes: Yakama, Pawnee, Cherokee Nation of Oklahoma, White Mountain Apache, Navajo and the Agua Caliente Band of Cahuilla Indians among others. 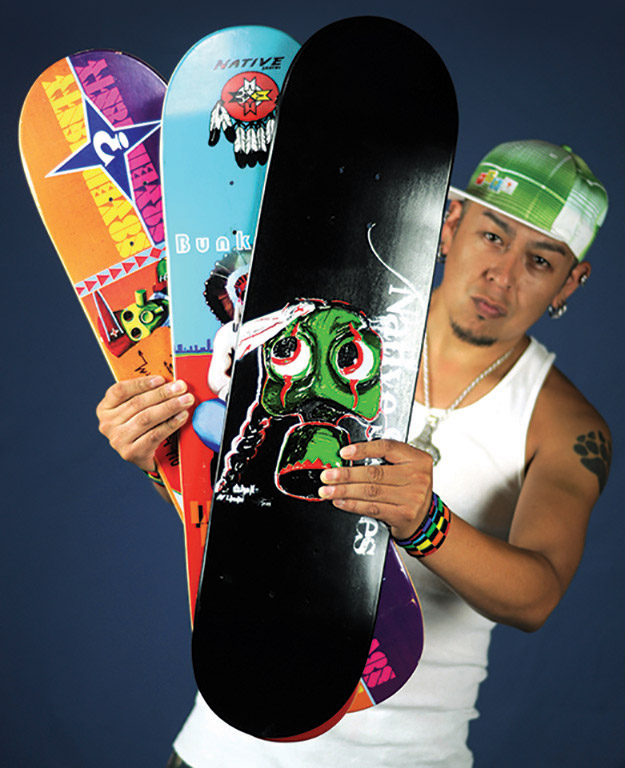 June 30 | 2:00-4:00pm | Marvin Auditorium 101BC
Ramp It Up! Film and Discussion [11-18 years] Watch a documentary of Native skaters performing tricks and an interview with Bunky Echo-Hawk, artist and performer.

July 22 | 2:00-4:00pm | Marvin Auditorium 101AB
Skateboard Logo and Sticker Design [11-18 years] Young skaters brainstorm a design that best represents both a love of skateboarding and the library. Then, we send it on to be printed on stickers you can put on your board.