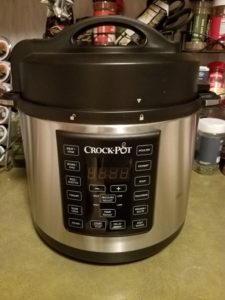 This is my pressure cooker and I love it!

During the past year I kept hearing about this thing called an Instant Pot and how amazing it was. A few months ago I finally looked into it and found out it was a pressure cooker. I started asking my friends who had one why they thought it was so great. Over and over again, I heard that it was a great way to cook food without it having to take forever. I finally caved and bought a pressure cooker of my own around the holidays. (Different brand, but who doesn’t love a great sale?) I now wonder what I ever did without one.

The first thing I ever made in one was less than successful, but I blame the recipe. (Chicken that tastes like it was cooked in catsup is not on my list of things to eat.) However, it was great in one regard: I was able to verify that the pressure cooker cooked the food the way that I wanted it to. The chicken came out fully cooked and juicy, just like it was supposed to. The next dish I made has become a favorite for my husband and me. It was a potatoes side dish that was ready in about half the time it normally took in the oven. The potatoes came out soft but not mushy, which is just how I like them. If you want to give it a try, check out How to Instant Pot: Mastering All the Functions of the One Pot That Will Change the Way You Cook.

One of the other things that I think is really cool about current pressure cookers is that many of them are more than just pressure cookers. Many modern pressure cookers have the ability to work as a rice cooker, slow cooker, steamer and yogurt maker. Once I started using my pressure cooker, I also was very pleasantly surprised to discover that the library has a variety of cookbooks specifically for pressure cookers, both as physical cookbooks in the Cooking Neighborhood as well as ebook versions I can check out from Overdrive onto my Kindle. It’s so convenient!

I’m loving experimenting with new recipes with my pressure cooker and I would love to hear what you like about them. What pressure cooker recipes or cookbooks do you like?