Much of the content of the Bulletin of the Shawnee County Historical Society focuses on Topeka, since it’s the capital of the state as well as the most populous area of the county. However, you can take an engaging tour through the rise and fall of other current and former towns as well. Let’s take a look at some extinct cities, AKA ghost towns. 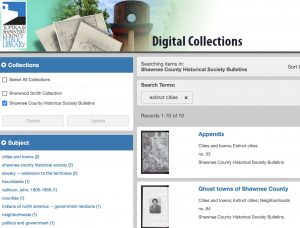 One of the topics in the Subjects section of the Bulletin is “Extinct cities.” Shawnee County is full of towns that no longer exist. I used two articles both titled “Ghost towns of Shawnee County” as my main sources for this topic. One is by Cecil Howes published in 1946, and one is by Daniel C. Fitzgerald published in 1987. If you’d like to see a reasonably complete list of all the places that used to be, check out Howes’ article.

Many of these ghost towns became Topeka neighborhoods as the city grew. It’s funny to think that downtown Topeka was once a separate town from areas only a mile or two away. From 1869 to 1888 the current Potwin neighborhood was its own city called Potwin Place. Not only was North Topeka a separate town, but it was also originally named Eugene. There was even a South Topeka, which was a surprise to me! The city of Topeka eventually annexed all these towns. 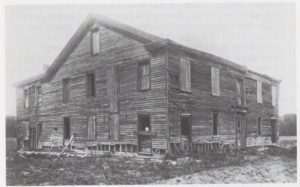 Indianola, Kansas, located near the Goodyear plant and right on Soldier Creek, didn’t even make it long enough to be annexed. For a few years after its founding in 1854, Indianola was a bustling place. The town boasted of having the first hotel in Shawnee County.

According to Fitzgerald’s article, “Indianola was on the government road from Fort Leavenworth to Fort Riley which was also a stage road. The heavy trade on the Military Road missed Topeka entirely and consequently Indianola was a very active place, while Topeka was considered non-progressive and inactive.”

Howes tells us, “Indianola promoters were so confident that the railroad would be built on a short line at the north edge of the valley that they refused to call an election to vote bonds to help the Kansas Pacific.” In a nutshell, the town didn’t offer any perks to the railroad company. The town of Eugene (North Topeka) did. It got the railroad. Today there is absolutely nothing left of Indianola.

Easy access to transportation and travel was a factor behind the founding and demise of several towns. The town of Brownsville, now Auburn, is “Situated at the head waters of the Wakarusa where three streams unite the little city of Auburn had easy access to the Fort Leavenworth, California and Santa Fe Trails,” which overlap with the Oregon Trail in Kansas.

John W. Brown and his sons founded Brownsville. (Not to be confused with the infamous anti-slavery activist John Brown, who came to Kansas with his sons at the same time.) The Browns bought 800 acres of land and some cabins from Shawnee Indians in 1854. Both Howes and Fitzgerald described ongoing conflicts with Native Americans who were losing their land. However, Brownsville grew and prospered over the next couple of decades. In 1857 the town changed it’s name to Auburn. The town had a hotel and two blacksmiths who catered to the travelers in covered wagons along the trail. Unfortunately for Auburn, by the 1880s railroad transportation had replaced travel by wagon. In 1882 its attempt to become the county seat failed. While Auburn didn’t suffer the same fate as Indianola and disappear entirely, it was no longer a growing community.

Speaking of county seats, politics was another main reason towns came into existence. There was competition between cities to be county seats, the territorial capital, and the state capital after 1861. This gets pretty confusing because some of the time there were two governments in Kansas. U.S. President Franklin Pierce and the federal government set up a legitimate government in Kansas. People who wanted slavery to be allowed in Kansas set up various illegitimate governments. This resulted in multiple constitutions and multiple places claiming the title of territorial capital. 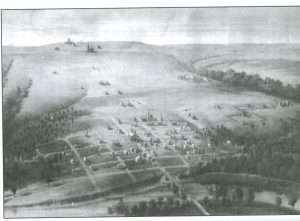 In Shawnee County the town of Tecumseh was in the thick of this. It was designated the county seat in 1855 by the first territorial legislature in Kansas territory, a pro-slavery legislature sometimes called the “bogus legislature.” (The Bulletins use this term in places, and I also recommend this article: Bogus legislature.) There was a whole lot of voter fraud going on under this government. See article: Why Shawnee’s boundaries changed.

In 1857, the free state legislature chose Topeka as the county seat. Auburn and Burlingame lost out. When time came to choose the state capital, Tecumseh presented itself as an option, but Topeka won again. Lawrence was the other main contender for state capital.

I’ve stopped my tour of Shawnee County there for now, but that’s far from all the Bulletins have to say about it. Try searching for Silver Lake, Rossville, or Dover and see what you can find out. Peruse more local history resources.