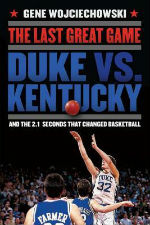 Nate:  Today we’re discussing the book, “The Last Great Game: Duke vs. Kentucky and the 2.1 Seconds That Changed Basketball”, written by Gene Wojciechowski. The game the title refers to is the 1992 East Regional Final played in Philadelphia, which determined one of the slots in that years’ Final Four. I remember watching this game when it happened, and although it seemed like a good game at the time, I don’t know if I really appreciated just how good it was. I’ve seen it a couple of times since, on ESPN Classic and such, and each time I watch it, I’m more and more impressed.

Dave:  I have to admit that I didn’t see the game when it aired because I was on my way to a wedding reception. I was listening to it on the radio in my car, and sat there in the parking lot at the wedding reception waiting to hear how it ended. I wasn’t going to miss the end, and am I ever glad I didn’t.

Nate:  Some games just have great endings, and although this game did have a great ending, that wasn’t what sets it apart from other college basketball games. Both teams played at a high level from start to finish. Several individual players had career games. And then there was the pressure that Duke was under to make it back to the Final Four to try and repeat as national champions.

Dave:  It was truly a game where the last team that had the ball was going to win – and that’s exactly what happened. Everyone thought Sean Woods was going to be the hero with his runner in the lane with 2.1 seconds left in overtime. But then Grant Hill makes about a 75 foot perfect pass to Christian Laettner, who knocks down the game winning shot. The accuracy of that throw, and the ability of Laettner to catch it and put himself in a position to turn around and make the shot were truly remarkable.

Nate:  I’ve heard behind the scenes snippets from this game before, such as Kentucky coach Rick Pitino wishing he hadn’t told his players to not foul on the final shot, because what eventually happened was that the Kentucky defenders were so afraid to foul that they didn’t really defend. Also, there has been debate over whether Pitino should have put someone on Grant Hill to defend the inbound pass. And while those issues are discussed, what I loved the most about this book is the way Wojciechowski  takes you behind the scenes of the players and the programs that were involved in the game.

Dave:  I really enjoyed the history part of the book as well. It’s hard to imagine, especially for young people, that Duke hasn’t always been the Duke we know now. The book explains how when Mike Krzyzewski came to Duke, they were pretty bad for his first three to four years. That’s hard to imagine. It’s also hard to imagine in this day and age a school and athletic director sticking with a coach through tough times like that. These days if you don’t show marked improvement within the first couple of years you’re gone.

Nate:  The players were really interesting as well. I enjoyed the fact that, although Duke had some of the blue chip recruits, they also had some guys who weren’t as highly recruited who turned out to be good or great players, and major contributors on those first championship teams.

Dave:  We also learned that Christian Laettner was a real jerk. Although I don’t know if that’s too much of a revelation.

Nate:  Yeah, but at the same time it was interesting to see how he knew how to press the right buttons on all of his teammates to make them better, and in turn make their team better. Like with Bobby Hurley – he ragged on Hurley all the time, but he knew that he needed to do that to Hurley in order to get the best out of him on the court. Hurley might not have liked it, but he was a better player in the long run, and Duke was a better team because of it.

Dave:  And while learning about Duke was interesting, the story of the Kentucky program, and their players, was even more remarkable. This was a program that, historically, had been as good as any other in the country. But it had been hit hard by the NCAA for violations, and basically was gutted, except for a few players who decided to stick around – mostly because of their love of Kentucky basketball.

Nate:  Yeah, it was mostly guys who had grown up in the state of Kentucky, had always dreamed about playing for Kentucky, and wouldn’t play anywhere else. They weren’t the most talented guys, but they were loyal, hard working, and Pitino pushed them to limits I’m sure none of them thought they had.

Dave:  And those are the guys who were seniors in this game against Duke. It’s hard to believe, when watching the game, that they weren’t highly recruited because they were impressive. And they meant so much to the Kentucky program that the decision was made at the end of the year to retire their jersey numbers.

Nate:  But the other part of the programs are the two coaches, who have been two of the most successful college basketball coaches of their generation, in Mike Krzyzewski and Rick Pitino.

Dave:  Yeah, they’ve both been incredibly successful, but you get to see how different they are in their styles and philosophies.

Nate:  And for Krzyzewski, even once he had brought Duke to national prominence, his teams were still seen as chokers. They finally broke through and won a national championship in 1991, but there were about five or six years in a row they made it to the Final Four, but came up short in the end.

Dave:  Pitino was also interesting. Although there was pressure on him to win because it was Kentucky basketball, he embraced that pressure, and in fact seemed to thrive on it. He came from a successful situation at the New York Knicks, knowing it was going to be difficult. He seemed to want the pressure and challenge that was going to come from the Kentucky job.

Nate:  I loved it when Wojciechowski told the story of Pitino bringing in a Sports Illustrated article talking about the depths Kentucky basketball had reached – they were actually on the cover. And Pitino announced that this was the last time Kentucky basketball would be called losers, and the next time they would appear on the cover of Sports Illustrated it would be because they had won a national championship. That was the kind of confidence and personality that program needed at that time, and he brought it in a big way.

Dave:  As far as recommending this book, I think it would appeal to any college basketball fan.

Nate:  I completely agree. You and I have no allegiance to Duke or Kentucky, but we still found the stories and histories of the programs, players, coaches, and the game itself to be interesting.