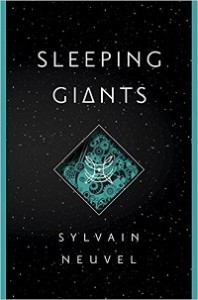 Eleven-year-old Rose was riding her bike when the earth opened up revealing a large hole. She fell into the opening and landed safely on a huge hand. The hand seemed to be thousands of years old, and it was a mystery who built the hand and why. The government studied the hand but discovered nothing and shelved the project until years later after another giant body part emerged from the ground.

All grown up Rose is a physicist and the lead researcher of a small team that is supposed to study the hand and find the giant’s other body parts. The ultimate plan is not to just find the parts, but to reassemble the giant in Sleeping Giants by Sylvain Neuvel. No one knows what will happen when this giant is put back together and the tension builds as the giant nears completion and the threat of its possible destructive powers grows.