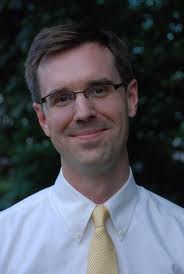 Poet Eric McHenry is a fifth-generation graduate of Topeka High School, and currently lives and writes in his hometown.

Of his connection with Topeka, he says, “I am of Topeka, and I have a hard time talking about what that means, for the same reason that a bird has a hard time describing the sky.”

McHenry’s poetry is often praised for its rhythm and rhyme. One reviewer applauded “the drumbeat of traditional forms” that drives his “wit-wrought metrical poetry.” McHenry’s poems have been featured in publications such as The Harvard Review, Slate, and Poetry Northwest. His criticism appears in The New York Times Book Review and Salon. He has published two collections of poetry, Potscrubber Lullabies and Mommy Daddy Evan Sage. He also edited Peggy of the Flint Hills, the memoir of Zula Bennington Greene. McHenry is a winner of the Academy of American Poets Prize, and his first collection of poetry, Potscrubber Lullabies, won the Kate Tufts Discovery Award in 2007. He was also the winner of a Theodore Roethke Prize in 2011. He currently teaches creative writing at Washburn University of Topeka.

Read the following interview to find out more about this talented homegrown poet. After the interview, read the full text of McHenry’s poem “Rebuilding Year,” originally published in The New Republic.

Robert Lawson, a former Washburn University English Professor, remembered that your mother once invited a group over to read the poetry of Robert Burns on Burns’ birthday.  Did your mother, or other members of your family, inspire a love of poetry from an early age?

Yes! My mother particularly. I remember her reciting Burns, in fact, and recalling her own mother’s love of Burns. My maternal grandmother was of that generation that learned to memorize and recite poetry in school — Longfellow and Lowell and Whittier — and I think she passed a love of performed poetry down to my mother, who passed it down to me. Poetry, for me, has always been an oral and aural experience first.

When did you start writing poetry?  What authors and poets have influenced your work?

In 7th grade I wrote down some Dylan lyrics and showed them to a friend, trying to pass them off as my own poetry. That was a first attempt at plagiarism, obviously, not at poetry, but I think that was a good early example of the poetic impulse: hearing “the best words in their best order” and thinking, “Oooooh, I wish I’d written that.” I wrote some poems in high school, but because I wasn’t really reading poems other than my own I didn’t have any idea what I was doing. I wrote a little more in college, but I still wasn’t serious. In the years immediately after college, when I was wishing I were back in college and that I hadn’t wasted so much of my time in college not reading, I fell pretty hard for the poems of William Stafford, Jane Kenyon, and Albert Goldbarth. In graduate school I learned the Modernists, and Elizabeth Bishop became important to me. And in the years after graduate school I really came under the spell of Larkin, and eventually of Auden and Frost, who have probably influenced me more profoundly and more permanently than any other poets.

You have deep roots in the Topeka community as a fifth generation graduate of Topeka High School, and many of the poems in Potscrubber Lullabies are set in Topeka.  Tell us how growing up in Kansas shaped you as a writer.

That question feels almost unanswerable – it’s too big and too important. I am of Topeka, and I have a hard time talking about what that means, for the same reason that a bird has a hard time describing the sky. Deep roots are part of it. An acute awareness of the past, and of the passage of time, is part of it. Feeling simultaneously at home and like an outsider is part of it. Being homesick even for where you are, and nostalgic even for the present, is part of it. But these are only parts of it.

In your piece “I Don’t Want to Live on the Moon,” you wrote that you never expected to move back to Topeka from Seattle.  What brought you back?  In what ways have you re-rooted yourself in Kansas since your return?

The job at Washburn brought me back, after 13 years away. I wanted to switch from full-time writing and editing to full-time teaching at the college level, and I was prepared (and my family was prepared) to go wherever the job was. And the job ended up being in my hometown, which still seems like a miracle. I do feel both re-rooted and permanently deracinated, because of course Topeka in 2013 both is and isn’t my hometown. (My hometown is really Topeka in 1982.) One of the oddest experiences is running into old friends and acquaintances who aren’t surprised to see me back because they don’t know I left. I’ve tried exploring all of this recently in a series of short poems I ended up grouping together under the title “You’re Back.”

Besides writing, what do you enjoy doing?  Do your hobbies influence or inspire your writing?

I like spending time with my family, watching soccer (especially when my kids are playing), walking, reading, talking, and disappearing down various Youtube and Wikipedia rabbit holes. The internet is, I’m afraid, an inexhaustible source of entertainment for me. Every room I go into has 12 doors leading to 12 other equally fascinating rooms. There are music videos that I spent entire days of my childhood waiting for, camped out in front of the TV; the ability to summon them whenever I want with just a few keystrokes is a breathtaking superpower.

Tell us a bit about Zula Bennington Greene’s recently published memoir, Peggy of the Flint Hills.  How did you become involved with editing the manuscript?  What did you take away from the experience?

Peggy was my next-door neighbor when I was a child, and a dear family friend. In her late years she wrote a memoir of her early years, but she didn’t publish it in book form. When I came back to Topeka in 2009, Peggy’s daughter, Dotty Hanger, asked if I would be willing to edit and help publish the book, and I leapt at the chance. It’s a magnificent memoir, and reading it felt like spending time with Peggy again.

Reviewers of your poetry often comment on your smooth use of wordplay, rhyme, and meter.  Kansas Poet Laureate Denise Low wrote that you “rhyme as effortlessly as the English poets,” and Kevin McFadden of Virginia Quarterly Review saluted “the drumbeat of traditional forms” that drives your “wit-wrought metrical poetry.”  “The New Ken,” for example, is a villanelle, and the poems of Mommy Daddy Evan Sage are composed of bouncy, rhyming couplets.  Can you tell us a little about your writing process?  Do you set out to write with a formula?  Do you do a lot of revision, or do your poems arrive nearly ready?

The poems certainly don’t arrive “nearly ready,” but I don’t know if “revision” is exactly the word for what I do, either. “Sitting around not writing, shaking my head, rubbing my brow, waiting for a good line to show up” is closer to the mark, I think. I’m a glacially slow writer. I like to think that’s because I have high standards for my work. I’m not a good generator of lines, but I know one when I hear it in my head, and I’m willing to wait for it. As to meter and rhyme, I just adore Frost and Auden and Gwendolyn Brooks and I want their chops. I want to make the kind of music they made with language, and I want to make it seem as effortless as they did, and that’s going to take a lot of effort.

You describe Mommy, Daddy, Evan, Sage as “poems for precocious children and immature adults.”  The collection is full of light-hearted wordplay and is illustrated with whimsical woodcuts.  Did the experience of preparing this collection differ from previous writing projects?

It did. I was just having fun, riffing on funny things my kids had said, or might have said. The poems weren’t easy to write, per se, but they didn’t resist being written the way my grown-up poetry does.

Tell us a little about your writing plans for the next few years.  Are you currently at work on another collection of poetry?

I’ve just finished a new manuscript, which I hope will be out as a book within a year or two. It’s called Odd Evening, and it’s a bit like Potscrubber Lullabies, but odder and more even. I also write occasional book criticism, and I’m hoping to write a somewhat ambitious nonfiction piece or two in the next year.

How can readers find out more about you and follow your work?

Visit the Waywiser Press web site, Google me (I’m not the surfer or the hipster visual artist, alas, but I’m almost certainly the third most prominent Eric McHenry out there), or email me: eric.mchenry@washburn.edu

After Beloit I went back to the paper
and wrote arts features for eight dollars an hour,
and lived in the Gem Building, on the block between
Topeka High with its Gothic tower
and the disheveled Statehouse with its green
dome of oxidizing copper.

I was sorry that I had no view
of old First National. Something obscured it
from my inset balcony. I heard it
imploding, though, like Kansas Avenue
clearing its throat, and saw the gaudy brown
dust-edifice that went up when it came down.

Friday nights I walked to High’s home games
and sat high in the bleachers,
and tried to look like a self-knowing new
student, and tried not to see my teachers,
and picked out players with familiar names
and told them what to do.

Learn more about Eric McHenry, and other Kansas authors, on the Map of Kansas Literature, a growing database of Kansas authors built by Washburn University and the Center for Kansas Studies.

Visit your Topeka and Shawnee County Public Library to check out poetry by Eric McHenry.  You can click the covers below to view our catalog listing for McHenry, and to place requests for his work.