A quick tug of the jersey; gloves fall to the ice; two men clutch each other in a clumsy macabre waltz – a punch – another – the crowd is on their feet!

What’s hockey without a good fight? And if someone loses a tooth, breaks his nose, shatters his jaw, becomes concussed, well, that’s what goons get paid for, right? 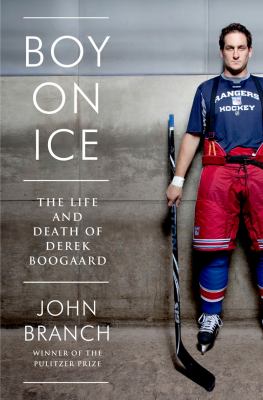 This was the life of Derek Boogaard, a shy, gentle kid from the vast plains of western Canada who dreamed of playing hockey for the National Hockey League. Awkward on skates with mediocre puck handling skills, his dream would never have come true except for one thing: he was big. Big enough to intimidate; big enough and willing enough to start fights on ice and win; big enough to be drafted as an enforcer and play professionally with the Minnesota Wild and the New York Rangers; big enough and savvy enough to keep quiet about the hundreds of highly-addictive pain pills he needed to take to make it onto the ice.

This is a story of hockey, yes, and also an exploration of  professional hockey’s culture of fighting, but it is really the story of a big, gentle boy who dreamed of playing hockey and never thought that dream might kill him. This story will break your heart.