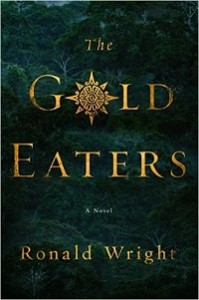 Waman was a young man full of hope, but his dreams for the future were abruptly changed when he was kidnapped by Spanish Conquistador Francisco Pizarro. The Spaniard’s desire for gold led him to the shores of the Inca Empire, and he needs an interpreter, so Waman is forced to learn Spanish, wear Spanish clothes, and is called Felipe. Waman desperately wants to escape his enslavement, but before he can escape Pizarro leaves for Spain with Waman in tow.

Escape now seems impossible as Waman begins to come of age in Spain, but Pizarro’s hunger for riches leads him back to the Incas. Upon their return Waman discovers that he has changed but so has the home he has left behind in The Gold Eaters by Ronald Wright. This historical fiction novel is about the clash of two empires with Waman caught in the middle as he tries to hold onto his dreams and life.