A floating bomb sailed into Halifax Harbour on the morning of Dec 6, 1917. The Mont-Blanc, a French munitions ship packed with 6 million pounds of high explosives, needed a safe harbor while she waited for a convoy escort to Europe. As she carefully maneuvered through the crowded Narrows, a Belgian relief ship, the Imo, was hurriedly making her way out of the harbor. At 8:46am the two ships fatefully collided setting the Mont-Blanc ablaze. The burning Mont-Blanc drifted toward the Halifax shore, drifted toward all the gawking people on the pier and at their windows, drifted as the minutes ticked down to the inevitable explosion. 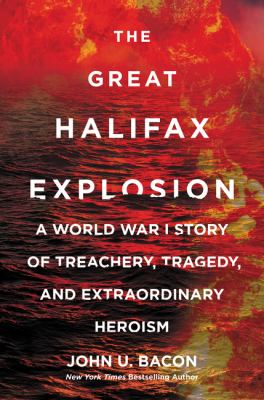 Clocks stopped. Windows shattered. In an instant the detonation obliterated 2 square miles and 1,600 people were killed instantly while thousands more were left injured and homeless. As if the horror of an explosion, shock waves and a tsunami weren’t enough, the temperatures dropped, snow began to fall and the wretched, decimated city had the worst blizzard in a decade.

It’s a remarkably tragic story that, as John Bacon said in his new book The Great Halifax Explosion, isn’t as well-known as it should be (although longtime readers of Lost in the Stacks may remember Laura MacDonald’s Curse of the Narrows). It’s a riveting story not just because of the details of the disaster, but because of the heroism and selflessness of so many people who aided the stricken city. In fact, each year the grateful citizens of Halifax donate a Christmas tree to the city of Boston for their speedy, well-organized and unasked-for help during the Halifax disaster.