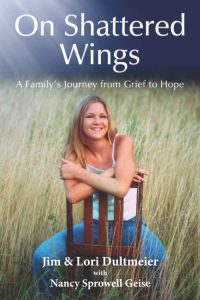 On Shattered Wings is the heartbreaking and inspiring story of a local family’s loss of their 19-year-old daughter in a drinking and driving accident. Nancy Sprowell Geise worked with the Dultmeier family to write the book. It is a story she knew could help others and even save lives.

Moving from personal journals to a book

Jim Dultmeier is the owner of a local roofing company. He and Geise first met when he visited her home to assess her roof for repair. The two began talking and Geise told Jim about her book Auschwitz #34207, a powerful story of surviving the Holocaust. Jim shared about the loss of his 19-year-old daughter in a drinking and driving accident. Friends and family had encouraged the Dultmeiers to share their story. However, they weren’t sure how to turn their grief journals and thoughts into a book. After reading their journals, Geise knew the story would impact everyone who read it and she was determined to help.

“I was struck by the very different, yet similar, ways Jim and Lori dealt with their grief,” Geise said. “Jim has a unique gift of words. The impact of losing his only daughter was profound. Lori’s raw vulnerability by her indescribable grief was something that I knew others would benefit from, whether it be dealing with grief, or helping others. I knew for certain that this book would have an impact on everyone who reads it.”

Geise also interviewed other family members and friends to give context for the journals and round out the story. It is a story of loss, but also an inspiring example of strength and perseverance.

“This is one remarkable and very strong family,” Geise said. “Theirs is a story everyone should read!”

On Shattered Wings impacts readers strongly as a reminder of the dangers of drinking and driving, and it is also a story of grief and faith that provides a road map for others dealing with a profound loss.

“One reader told me that she wished she had read it a long time ago. It would have helped her know what to do, and what not to do, with others who were dealing with profound grief,” Geise said.

The Dultmeier family ultimately decided to share their story because they knew it could have an impact.

“If this book saves even one life, that will be the greatest way to honor the beautiful life of Jennifer Dutlmeier and all those who loved her,” Geise said.

Meet the author and hear from the Dultmeier family on Sun, Dec 5 at 1pm in the library’s Marvin Auditorium, or attend virtually. Geise will discuss the process of writing this emotional story. She will also talk about the work Jim and Lori have done since Jennifer’s death to help others. Jim has worked as an impact speaker for Mothers Against Drunk Driving. Lori works with the founder of Quilts for Angels. Jim Dultmeier will share what he has learned from being an impact speaker for MADD.

Geise and Dultmeier invite your questions. Email ahead of time to: mericsson@tscpl.org, and we’ll get it to the authors. Book signing to follow. 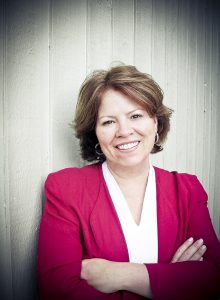 What compelled you to write this story?

After meeting Jim and Lori and their family and hearing some of what they went through, and the lessons and insights they learned from it, I knew theirs was a story that could be helpful to others and even save lives.

How did you meet the Dultmeiers?

It started with a leak in the roof of our home. We called Jim Dultmeier, the owner of a local roofing company, to give us a quote on a replacement roof. During our conversation, Jim asked what I did for a career and I told him that I was a writer. He wanted to hear about my book, Auschwitz #34207 The Joe Rubinstein Story. Jim shared that he lost his 19 year-old-daughter, Jennifer, in a drinking/driving accident several years earlier. The driver was Jennifer’s best friend since childhood.

Jim kept a journal of his grief journey and said that several of his family and friends told him they thought he should publish it. Jim asked if I would read it. After doing so, I told Jim that I thought others would benefit from his insight but that it would need to be reduced as it was not written for publication, but more as a stream of consciousness. It was several hundred pages.

Jim asked if I would help him. It was then that I met his wife, Lori, and she hesitantly shared that she had also written a grief journal…something that she had not told anyone about. Lori is a very private person. The loss of her daughter was as personal as anything could be. She agreed to let me read it. It left me shaking with emotion, and in awe of her ability to capture so powerfully what she was going through.

I was struck by the very different, yet similar, ways Jim and Lori dealt with their grief. Jim has a unique gift of words. The impact of losing his only daughter was profound. Lori’s raw vulnerability by her indescribable grief was something that I knew others would benefit from, whether it be dealing with grief, or helping others. I knew for certain that this book would have an impact on everyone who reads it.

What were the greatest challenges you faced writing On Shattered Wings?

It was actually a complicated story to write, mainly because on one hand, I had so much material to work with, and yet, in other ways, not enough material. Both Lori and Jim’s journals focused on the emotions of what they were going through, but they had little background of what was happening in their day-to-day lives and their family.

I wanted to keep the integrity of their journals, but I also needed to give the reader a context in which they were written. In the end, I used in-depth interviews with Lori and Jim and their family/friends to fill in the background information for the journals. The addition of letters from Jennifer’s twin brother, and her older brother, are incredible. This is one remarkable and very strong family. Theirs is a story everyone should read!

In what ways do you think this book is impacting readers?

Several people have said that in the beginning, the book was hard for them emotionally to read, but that they were very glad they kept going, as it got easier as they continued doing so. Many told me that they had to keep reading to find out what happened and that the story had made a big difference in their lives. Not only in the grief and faith aspects but as a powerful reminder about their own drinking and driving habits. Several have shared that they were not only going to have their teenagers read it, but it caused them to re-evaluate their own drinking and driving behavior. If this book saves even one life, that will be the greatest way to honor the beautiful life of Jennifer Dutlmeier and all those who loved her.

What have you learned about grief from the Dultmeier’s story?

One reader told me that she wished she had read it a long time ago. It would have helped her know what to do, and what not to do, with others who were dealing with profound grief. I felt the same after hearing this story. It puts into perspective the often very long grieving process and ways to support those others going through it.

I’ve read a lot about the stages of grief, but what this story is a good reminder of, is something Lori said, that the stages are not neat sequences that can be checked off like a to-do list. The stages can be long, repetitive and messy, and they can be recycled again and again. But like the splash of a stone in a pond, the stages of grief expand out. Later, they still come, but not necessarily as close together as they did in the beginning.

The other thing that struck me about this story, is the profound impact Jennifer’s death had on so many people and continues to have two decades later. So many people talk of their lives as either before or after the accident. That was especially true for Jennifer’s brothers. What those two went through as a result of Jennifer’s death, including one facing drug addiction, was raw, complicated, and profound.

How did the Dultmeier’s faith impact their ability to deal with the loss of their daughter and what can others learn from it?

The reality of this story for me is that it is a poignant reminder that death can come when we least expect it. Jim talked about how Jennifer had no idea when she went out that night, that she would never come home. Jim said that Jenifer’s death made him realize that when his time comes, he wants to make sure that whatever he is doing at that moment is something that will be honoring God, his family, and his life. It made me realize that I want the same.

Without their faith in God, the Dultmeirs admit that they would never have survived. Jennifer’s death tested not only their marriage, and brought them nearly to the brink of falling apart, but it also forced them to face their deepest fears and to rely on their faith and trust in God, to survive. How they did so, are things which I will never forget.