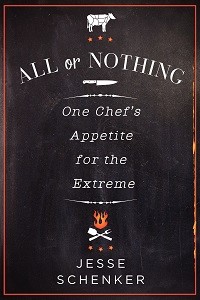 Jesse Schenker is a rising star in the culinary world with two restaurants, Recette and The Gander. He is a James Beard semifinalist and has received wonderful reviews and has made numerous top lists both as a chef and for his restaurants. His life wasn’t always a success, though, because earlier he was an addict living on the streets.

Starting at twelve he began his relationship with drugs that would grow into a habit that would take over his life and alienate him from his family and his other love: cooking. Eventually, he would end up in prison and on kitchen duty which would ignite his former passion for food.

After hitting a new low Jesse decided to change and took a chance for redemption even as he struggled against his addictions. All or Nothing: One Chef’s Appetite for the Extreme by Jesse Schenker is a frank memoir of his experiences with drugs to the salvation of cooking.