My recommendations for August’s new fiction are all about second chances. In Mercury Pictures Presents Maria is an Italian immigrant working in Hollywood in the 1940s trying to make peace with her past. Mika is striving for a relationship with the daughter she gave up for adoption in Mika in Real Life. After 33 years Ruby is returning to her irreverent octogenarian sisters to help the coven keep their home in The Witches of Moonshyne Manor. Two warriors shepherd an ancient god across a broken land to end the tyrannical reign of a royal family in the epic fantasy The Spear Cuts Through Water. The Lost Ticket is a warmhearted story about love, second chances and unlikely friendships. Keep reading to explore this month’s Fiction Five. 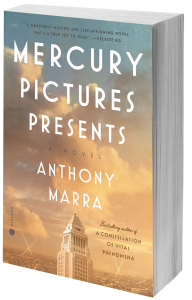 Maria Lagana came to Hollywood to outrun her past. She was born in Rome and has fond memories of weekly visits to the cinema with her father. After her father was arrested Maria and her mother immigrated to Los Angeles.

Fifteen years after moving to LA, America is on the verge of joining WW II and Maria is an associate producer at Mercury Pictures. She’s trying to keep her life from falling apart. Her mother isn’t speaking to her. Her boss has been summoned to Washington by congressional investigators. The studio is on the verge of bankruptcy. Her boyfriend, a Chinese American actor, can’t escape the studio’s narrow typecasting.

Over the coming months, Mercury Pictures becomes a nexus of European immigrants: poets working as B-movie screenwriters, once-celebrated architects becoming scale-model miniaturists, and refugee actors finding work playing the villains they fled. While the world descends into war, Maria rises through a maze of conflicting politics, divided loyalties and jockeying ambitions. When a stranger from her father’s past threatens Maria’s carefully constructed life, she must finally confront her father’s fate and her own.

“Crackling with wit and suffused with insight, Anthony Marra’s new novel is as epic in sweep as a movie set yet delineates the inner workings of the human heart with a miniaturist’s precision. Mercury Pictures Presents explores the endless give-and-take between life and art, the cost of integrity, and the ways we must make peace with the past in order to move toward the future.”—Celeste Ng, author of Little Fires Everywhere


“Mercury Pictures Presents runs from Mussolini’s Italy to 1940s Hollywood, and is full of history, comedy, and horror. It’s a great literary read.”—Ann Patchett, author of The Dutch House 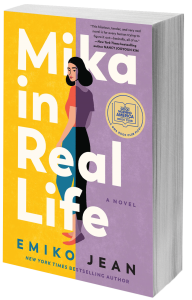 Mika is getting to know Penny, the daughter she placed for adoption 16 years ago. At the same time 35 year-old Mika finds unexpected love with Penny’s widowed father. Will she finally have a chance to have the life and family she’s always wanted or will her deceptions catch up with her?

“Mika In Real Life is a poignant and compelling exploration of identity, love, and what it means to be a mother. Mika and Penny swept me along on their emotional and unforgettable journey… By turns hilarious and heartbreaking, this is a total joy of a read.” — Holly Miller, author of The Sight of You

“A wonderful, life-affirming story about second chances, parenthood and love. By turns tender, funny, and deeply romantic, I was rooting for Mika, Penny and Thomas.” — Lauren Ho, author of Lucie Yi Is Not A Romantic and Last Tang Standing

3. The Witches of Moonshyne Manor by Bianca Marais 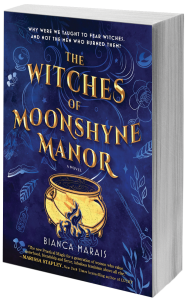 “The Sisterhood has lived at Moonshyne Manor and Distillery for over 80 years. Ivy is the keeper of plants and preparer of elixirs (with witchy recipes included). Tabitha is the animal whisperer. Ursula reads the future. Jezebel casts seduction spells. Queenie is magical with inventions. Ruby has shape-shifting and transitioning powers.

“Although the magic of these irreverent octogenarians is fraying around the edges, they still love their uniqueness. But all is not well, and Ruby has been gone for 33 years, leaving her sisters on the night of a disaster. The others have longed for her return, but they also need her to lead them to the treasure stolen right before she went away. That is the only thing that will prevent foreclosure of the manor. When Ruby arrives their reunion is anything but magical, and they must confess old secrets if they want to save the Sisterhood.

“The new Practical Magic for a generation of women who value sisterhood, friendship and fierce, fabulous feminism above all else. It was an absolute delight from start to finish, and the kind of book I’ve been craving for years. Escapist and hilarious but also bold and incisive, this novel has shot to the top of my list of favourites.” — Marissa Stapley, New York Times bestselling author of Lucky

4. The Spear Cuts Through Water by Simon Jimenez 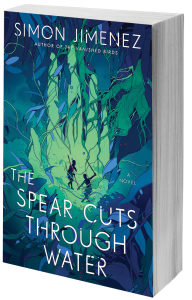 The Moon Throne has oppressed the people and abused the land during their 100-year reign. The emperor and his three sons, known as the Three Terrors, keep a god imprisoned under the palace, which gives them dangerous powers.

A guard, Jun, and an outcast, Keema, help the god escape. Now the Three Terrors are willing to do anything to get her back and hold on to their power. Jun and Keema accompany the god and her five-day pilgrimage to return to her home. Will they succeed on their treacherous mission to secure freedom for the god and the people?

“A beguiling fantasy not to be missed.”—Evelyn Skye, New York Times bestselling author of The Crown’s Game

5. The Lost Ticket by Freya Sampson 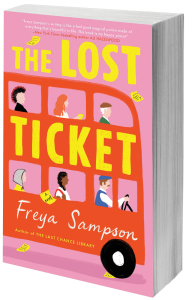 Libby arrives in London brokenhearted and feeling lost. On the bus she meets Frank, an elderly man with a story about the girl who got away or more accurately the girl he lost. In 1962 he met a beautiful girl on the bus, got her number and made plans for a date. Then he lost the ticket with her number on it. He’s been riding the same bus for the last 60 years trying to find her.

Libby is determined to help Frank find this woman. During her quest she begins to make new friends and maybe open her heart again. As Frank’s dementia begins to worsen they are running out of time to find his lost love.

“It’s hard to think of another book quite as delightful as this one. The Lost Ticket is basically the best hug in the world in book form. It’s a story about love and second chances and the best kind of unlikely friendships. Pick up this book if you’re yearning for some joy in your life! –Jesse Q. Sutanto, National bestselling author of Four Aunties and a Wedding

“Freya Sampson’s The Lost Ticket is an unputdownable masterpiece of heart, hope, and humanity. I cheered, swooned, and gasped with each turn of the plot, staying up well past my bedtime because I needed to know what would happen next. Sampson’s lovable cast of characters will steal your heart, lift your spirit, and make you wish you were a passenger on the 88 bus.”—Sarah Grunder Ruiz, author of Love, Lists, and Fancy Ships