Ramp It Up Opening Reception with DJ Fraktul | Saturday, June 28

It is my goal to truly exemplify the current state of Native America through art.
—Bunky Echo-Hawk

Identities explores the tension between the past and the present through the eyes of Pawnee/Yakama artist, Bunky Echo-Hawk and his experiences as 21st century American.

Relying on a mixture of pop culture appropriation, traditional Native craft, and at times in-your-face stereotyping, Echo-Hawk exposes how Native people see themselves, how non-Native people perceive them, and how Native identity is often confusing for both the artist and the audience.

Echo-Hawk’s work doesn’t clearly define what it means to be a contemporary Indian. Instead, he illustrates how the persistence of stereotypes continues to undermine and challenge Indian identity.

Bunky Echo-Hawk is a multi-talented artist whose work spans both media and lifestyle. A graduate of the Institute of American Indian Arts, he is a ﬁne artist, graphic designer, photographer, writer and a non-proﬁt professional. Bunky is a traditional singer and dancer of the Pawnee Nation and an enrolled member of the Yakama Nation.

Throughout his career, he has merged traditional values with his lifestyle and art. He has exhibited in major exhibitions throughout the United States and internationally, including in NYC, Chicago, Denver, Santa Fe, and Frankfurt, Germany, to name a few. His poetry has been published in magazines and anthologies, and his plays have been performed and produced across the nation.

Bunky speaks at conferences, conducts workshops and teaches both art and writing. As an advocate and an educator, Bunky travels extensively, creating live works of art for auction. Through his art, Bunky has raised thousands of dollars for non-proﬁts. Bunky begins the performance by creating a dialogue with the audience, where socially relevant and meaningful discussion takes place. He guides the audience through conceptualizing a painting, which he creates on the spot for the host organization, while participants continue to contribute their ideas, opinions and personal testimony. 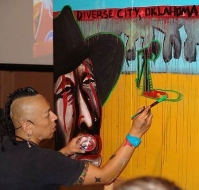 Bunky is the 2012 Eiteljorg Museum Artist in Residence. In 2008, the First Peoples Fund named him a Business in Leadership Fellow. Bunky was also nominated for the United States Artist Fellowship in 2008 and received the 2008 Boulder County Multicultural Award.

Nike signed Bunky in 2010, to design for the Nike N7 line. Bunky lives and works in Pawnee, Oklahoma. To learn more about this artist, his projects and work, please visit the Official Bunky Echo-Hawk Facebook Fan Page, follow his music at www.reverbnation.com/bunkhauswax, and www.soundcloud.com/bunkhauswax.

Text courtesy of the artist.