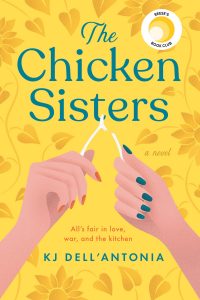 Two sisters face off in a reality show restaurant battle in this story about family and second chances set in small town Kansas. In the tiny (fictional) town of Merinac there are two restaurants directly across from each other that both specialize in chicken. The founders of Mimi’s and Frannie’s were sisters. Customers have argued over which one is better since they opened a century ago.

Amanda and Mae grew up working for their mom, the owner and cook of Mimi’s. Mae now lives in New York City making her living as a guru of organization and tidiness. She’s also a social media influencer who is always framing up her next photo or composing her next post. Amanda still lives in Merinac and shockingly she married Frank Pogociello, heir to Frannie’s. Amanda now runs Frannie’s with her mother-in-law, Nancy. Her mom hasn’t totally disowned her, but Amanda is no longer allowed in Mimi’s and the two are not at all close.

Amanda has drifted along since her husband’s death, unsure what she wants to do with her life. She reaches out to the reality show Food Wars to pitch a competition between Mimi’s and Frannie’s. Amanda wants a change as much as anything. She just wants something to happen. One of the restaurants (Frannie’s, she’s sure) will win $100,000. Amanda knows the competition will increase publicity and sales for both restaurants making everyone’s lives better.

Of course, Food Wars wants good television, which means stirring the pot. Amanda and Mae will be challenged to find a way to stand together when their family secrets are shared with the world.

Does this story sound familiar to you? K.J. Dell’Antonia lived in Kansas for a time and was inspired by two real-life restaurants in Pittsburg, Kansas. Chicken Mary’s and Chicken Annie’s were featured on The Travel Channel’s show “Food Wars” in 2010.

While you wait for your copy of The Chicken Sisters check out these books for more family secrets, small towns, strong female characters and sisters.

The House We Grew Up In by Lisa Jewell 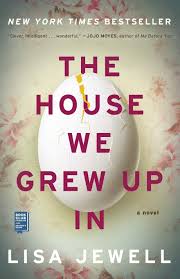 Lisa Jewell is a master of twisty reads that keep you guessing and turning the pages. In The House We Grew Up In she brings her talent to a family story that will hook readers in from page one. The story is about a family and all of the messy, complicated bonds between them. Mom, Lorelei, is a free-spirited woman who says she lives in the moment. However, she cannot bring herself to throw things away. Lorelei has always been a little odd and most of the family laughs off her little quirk.

One Easter Sunday a horrible tragedy strikes and loosens the family’s bonds with each other and drives Lorelei to hold on even tighter to her things. Her home becomes both haven and prison as the years pass and more and more collections accumulate.

The book begins with Lorelei’s family returning home after her death to clean up a house right out of the show “Hoarders.” The story flashes from present to past, through the perspectives of Lorelei and her children. We gradually come to know characters who are lovable, tragic and flawed. How can a family so broken ever come together again? Will the loved ones Lorelei left behind ever understand why she lived the way she did? Available instantly on Hoopla as an audiobook.

The Bright Side Sanctuary for Animals by Becky Mandelbaum 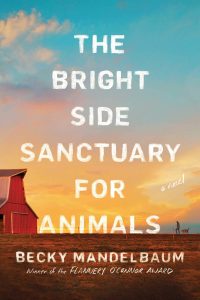 The Bright Side Sanctuary for Animals is set in rural Kansas and focuses on a family relationship gone wrong, and a family home in need of care and work. In her first novel, Mandelbaum transports readers to an overwhelmed animal sanctuary in western Kansas. It’s 2016, just after the presidential election. Tensions are high across Kansas and the nation. Mona runs an animal sanctuary with the help of one hired man, Gideon. Together, they save many animals from abuse and death, but the work is intense and the bills are high. It looks like Mona may have to sell her land and give up the sanctuary, especially after a neighbor sets fire to her barn and vandalizes her property with hate speech.

Mona’s daughter, Ariel, has lived in Lawrence since she ran away to attend college years before. She hasn’t been home or called her mother since she left. However when Ariel hears about the fire, she knows she has to go home, help her mom and mend fences. This is a story about second chances, the bonds between animals and humans, and the way family relationships impact our lives.

The Bookish Life of Nina Hill by Abbi Waxman 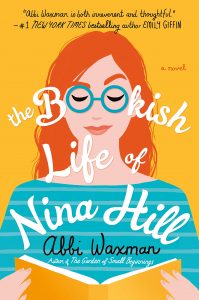 The Bookish Life of Nina Hill is a story about reconnecting with family, the value of relationships and a bit of romance. Nina believes there are five perfect things in the world – reading, cats, dogs, honeycrisp apples and coffee. She’s a trivia queen who works in a bookstore. Every week Nina schedules an evening dedicated to reading and alone time. Her life is fun, organized and balanced, even if it is so busy that she literally pulls out her planner to schedule in a date at one point.

Nina has never known her dad, so she’s surprised to learn he has died and left her something in his will. Suddenly her quiet life is connected to family she never knew she had. They’ve been right in her home town of Los Angeles all along. Nina finds herself thinking hard about the people in her life and what she might be missing.

The Authenticity Project by Clare Pooley 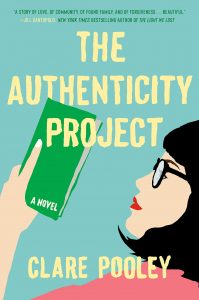 The Authenticity Project is an upbeat story about the connections between people, second chances and focusing on what is important. I loved this heartwarming story about a cast of quirky characters who decide to get real and make something of their lives.

The Authenticity Project begins when 79-year-old Julian leaves a notebook in a local cafe, posing an intriguing question: “Everybody lies about their lives. What would happen if you shared the truth?” He writes about his loneliness, an appeal that reaches Monica, the owner of the cafe and the next person to pick up the notebook. She adds her own story and leaves the notebook for someone else to find. Monica begins thinking about ways to soften Julian’s loneliness. This story of soul-searching, kindness, friendship, revelations and lovely resolutions is enhanced by each person who picks up the notebook.

One of the Good Ones by Maika Moulite 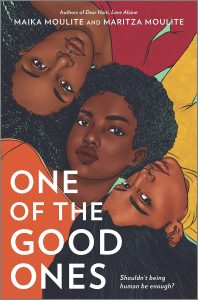 This one is the stretch. Like The Chicken Sisters, One of the Good Ones is a story about sisters getting to know each other again as real people. They are facing up to the past to build a stronger relationship with each other and their parents. This story explores family themes while also tackling race and social justice.

Kezi is an activist with a huge online following. She’s an A student, dependable and respectful, certainly one of the “good ones.” Kezi wants to make her mark on the world. Her life is cut short when she dies in police custody following her arrest at a protest.

Her sister Happi is the one who cuts class to hang with boys and just gets ok grades. She’s talented on stage, but has no idea what she wants to do with her life. After Kezi’s death, older sister Genny plans a road trip in her memory, following plans that Kezi left behind. The two remaining sisters, along with a couple friends, set out to visit havens listed in the Negro Motorist Green Book.

The story flashes from the present day road trip into the past. It is told from the perspective of Happi and Kezi. As the survivors, they grapple with their role in their sister’s loss and try to imagine the future without her. Then another shocking twist changes their lives forever. Available instantly on Hoopla as an audiobook.