Lisa Brown thinks everyone should read The Perfect Storm: A True Story of Men Against the Sea by Sebastian Junger. Listen in on the discussion in this episode of HUSH to see if hosts Thad Hartman, Miranda Ericsson, and Lissa Staley agree.

In this new series of You Made Me Read It! episodes, each podcast guest challenges the hosts with a book recommendation and – hopefully – everyone discovers great new reads.

Spoiler Alert: the Andrea Gail sinks and the reader knows it before the story begins. If you want to read the book first, get The Perfect Storm from the library before you listen.

It was the storm of the century – a tempest created by so rare a combination of factors that meteorologists deemed it “the perfect storm.” When it struck in October, 1991, there was virtually no warning. “She’s comin’ on, boys, and she’s comin’ on strong,” radioed Captain Billy Tyne of the Andrea Gail from off the coast of Nova Scotia. Soon afterward, the boat and its crew of six disappeared without a trace. 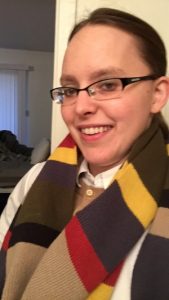 Coming up in three weeks, on the next episode of You Made Me Read It! – Michelle Stottlemire recommends Better Off: flipping the switch on technology by Eric Brende. Subscribe via iTunes or check back after August 30.

Interested in hearing more like this? Check out some of our other popular episodes including Best Books of 2015 and the earlier episodes of You Made Me Read It!

If you would like to be our next guest for You Made Me Read It! leave a comment or email us podcast@tscpl.org.