It was truly a grotesque sight: the corpse of a young woman, drained of blood, cut in half at the torso, lay among the weeds in an empty lot in suburban Los Angeles. Perhaps most unnerving was the leering smile the killer had cut from ear to ear. Thus began on a chilly January morning in 1947 one of the most notorious cold cases in American history – the mysterious death of Elizabeth Short. 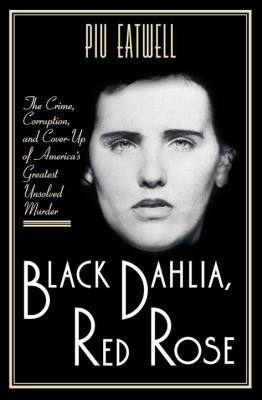 Journalists immediately pounced on the sensational case. The “Black Dahlia” as they soon dubbed her, was young, beautiful and had a past that although not exactly scandalous, wasn’t completely innocent either. In truth, Elizabeth “Beth” Short was a recent transplant from Massachusetts who drifted through California in search of love and stability. Although she had many shady associates, the Los Angeles police were baffled as to her killer’s identity, even as the fiend taunted them with phone calls and packages. It would take the wily instincts of a police psychiatrist to finally break the case.

In Black Dahlia, Red Rose, Piu Eatwell takes a fresh look at a case that has haunted the collective imagination for years. With a deliberate noirish flair, she brings to life 1940s Los Angeles with its glitter of Hollywood gold and the seamy, tarnished corruption underneath. Meanwhile she deliberately builds a compelling case for the identity of the Black Dahlia’s murderer. Even if readers don’t agree with her conclusion, they will enjoy this skillful writer’s investigation of an infamous crime.