The cheeseheads are getting excited, so are the Raiders fans, and the guy in the gorilla costume, and all the boisterous, trash-talking fans who wait outside the stadium gates. Inside the stadium there is a different kind of excitement – will fights break out? Will the turf get destroyed? WILL THERE BE ENOUGH BEER? The stadium – the vast oval of concrete and steel rising from acres of concrete – will play host to the hopes and dreams of fans, but as Rafi Kohan entertainingly writes in The Arena, the history and inner workings of these iconic structures are fascinating in their own right. 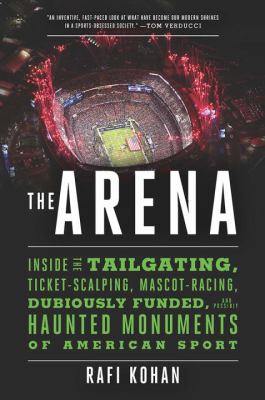 From storied Landeau Field in Green Bay, Wisconsin, to the ultra-modern AT&T Stadium in Arlington, Texas, Kohan visits sports stadiums across the country and gets the inside story on these structures that figure so prominently in American culture. He clips the ivy at Wrigley Field, chats with scalpers in Cleveland, tags along with the grounds crew in Atlanta and even recoils from the stench as our own KC Sluggerrr strips off his costume. Kohan also explores more serious issues, such as the role the Superdome played during Hurricane Katrina and the effect of the Sandusky scandal at Penn State.

As Kohan candidly admits, The Arena is not a sports book – players and games are mentioned only peripherally – but sports fans will surely delight in the secret world of the stadium. Win or lose, entertainment is really the name of this game – so let the games begin!