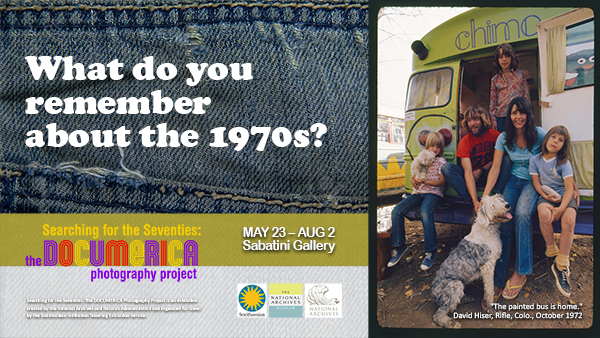 From gas shortages to bell-bottoms, this new exhibition is a fascinating time capsule of 1970s America. This collaboration between the Smithsonian and the National Archives and Records Administration stops in Topeka on its 15-city national tour.

Follow TopekaLibrary on Instagram for features about Topeka in the 1970s and an exciting new local history project called Humans of Topeka. 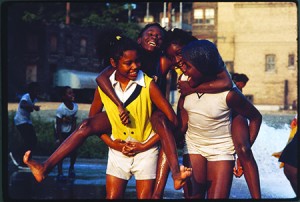 “Black youngsters cool off with fire hydrant water on Chicago`s South Side in the Woodlawn community. The kids don’t go to the city beaches and use the fire hydrants to cool off instead. It’s a tradition in the community, comprised of very low income people. The area has high crime and fire records. From 1960 to 1970 the percentage of Chicago blacks with income of $7,000 or more jumped from 26% to 58%.”
John H. White, Chicago, Ill., June 1973

Images of everyday life in 1970s America evoke disco dancing and inflation, protests and bell-bottoms, gas shortages and suburban sprawl. At a time when the Vietnam War and the Watergate scandal wore on the national psyche, a burgeoning movement to protect the natural environment was gaining force.

Searching for the Seventies: The DOCUMERICA Photography Project takes a look at the ’70s using 90 remarkable color photographs taken for a federal photography project called Project DOCUMERICA (1971–1977). Created by the Environmental Protection Agency, Project DOCUMERICA was born out of the decade’s environmental awakening, producing striking photographs of many of that era’s environmental problems and achievements. Drawing its inspiration from the Great Depression-era Farm Security Administration photography project, DOCUMERICA photographers created a portrait of America in the early and mid-’70s. About 70 well-known photographers, including John Corn, Lyntha Scott Eiler, Danny Lyon, Flip Schulke and John H. White, completed 115 separate assignments between 1972 and 1977. They took shots of small Midwestern towns, barrios in the Southwest and coal mining communities in Appalachia. Their assignments were as varied as African American life in Chicago, urban renewal in Kansas City, commuters in Washington, D.C., and migrant farm workers in Colorado. 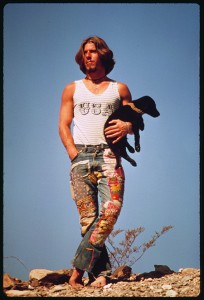 What emerged was a moving and textured portrait of America. Capturing a rapidly changing society with surprising resonances to the present, “Searching for the Seventies: The DOCUMERICA Photography Project” is a sampling of images culled from a trove of thousands. DOCUMERICA photos include expected images of smog, polluted rivers and waste dumps. But the photos also capture the decade’s fashions, trends and lifestyles. From smokestacks to leisure suits, these images are a fascinating time capsule of ’70s America.

The exhibition’s three sections are named after popular songs of the time:

“Ball of Confusion” documents the tumultuous environmental, political and social reality of the ’70s. The energy crises, slow economic growth and high unemployment were themes pursued by many of the photographers. They brought issues such as the future of cities, gender equality, abortion and gay rights into crisp focus.

“Everybody Is a Star” showcases vibrant and diverse examples of self-expression—bell-bottoms, bare midriffs, mini dresses and bright colors—all were in stark contrast to the buttoned-up fashions and accompanying societal norms of the 1950s and early ’60s. The ethos of the ’70s was “do your own thing.” Some of the DOCUMERICA photographers were drawn to subject that emphasized growing appreciation of ethnic and cultural diversity.

“Pave Paradise” illustrates the fragmented landscape of America in the ’70s. Much as today, many Americans had romanticized notions of an idyllic life in small-town America. But small-town reality was often one of poverty, pollution and quickly dwindling populations. The photographers also exposed the stark differences between sprawling suburbs and crumbling inner cities of the ’70s. They trained their cameras on the great vistas and natural beauty of the American landscape, capturing the threat of development and environmental damage done in the name of progress. 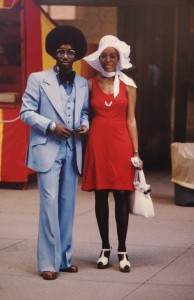 “Searching for the Seventies: The DOCUMERICA Photography Project” is a collaboration between SITES and the National Archives and Records Administration, which now holds the original DOCUMERICA photographic materials and administrative records. The archival records and some 22,000 slides, in addition to negatives, prints and microfiche, are stored in the stacks of the National Archives in College Park, Md. Almost 16,000 of the DOCUMERICA images can be viewed on the Archives’ website and on Flickr.

SITES has been sharing the wealth of Smithsonian collections and research programs with millions of people outside Washington, D.C., for more than 60 years. SITES connects Americans to their shared cultural heritage through a wide range of exhibitions about art, science and history, which are shown wherever people live, work and play. Exhibition descriptions and tour schedules are available at www.sites.si.edu.