We have a large and diverse permanent art collection at the Library. This year we made the decision to turn the Hirschberg Gallery (the small entry space of the Sabatini Gallery) into a permanent collection space. That means more library art on display year-round. Our goal is to curate exhibits that will compliment our main exhibits, but they will be separate entities. You now get two shows instead of one, beginning with Chinese decorative art objects! 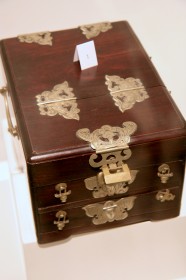 A symbol is an object, action, or idea that represents something other than itself, often of a more abstract nature, like the Apple computer “apple” or the Nike “swoosh”. Symbols play a large role in our everyday lives, from the green mermaid on your morning coffee cup (Starbucks logo) to the important red hexagon at your street corner.  Symbols are common to all cultures and are used to communicate messages. For the Chinese, they can represent virtues such as luck, prosperity, a long life, happiness and wealth.

The Chinese language influenced the development of symbolism. Rather than using letters to make a word, Chinese characters are essentially pictures, or symbols of something else. One character can embody an entire thought. Chinese is also a tonal language. How a word is pronounced communicates its meaning. When two words are pronounced the same but differ in meaning it is called a homophone. For example, the words for good fortune and bat sound the same but are written with different characters. Because of this, the bat is a symbol of happiness and good luck in China.

Chinese homophones by nature contain hidden messages, many of which appear as symbols on works of art, common household items and clothing. Learning the symbolic meaning of an animal, flower or tree will bring you closer to understanding the significance behind many of the objects you see on display in the Gallery. —Zan Popp