See some of Topeka’s changes in the last 157 years since becoming state capital. On Jan 29, 2018, the state of Kansas will turn 157 years old. After almost a decade as the Kansas Territory the Sunflower State joined the union in 1861 and Topeka was designated the official capital.

The name “Topeka” is actually a sentence from the Kansa-Osage language, meaning “place where we dug potatoes” or “a good place to dig potatoes.” The name Topeka was chosen by the city founders because it sounded new, novel and was a nod to the Indian population. The city was laid out in 1854 and was founded by anti-slavery men after the Kansas-Nebraska Act passed.

The city was granted a charter in 1857 and the State Library of Kansas was established. There were fears Topeka wouldn’t survive to its fifth birthday as state capital when the city was threatened with invasion and destruction during Price’s Raid in 1864. Fort Simple was then constructed to protect the city from Confederate troops, but was torn down in 1867. 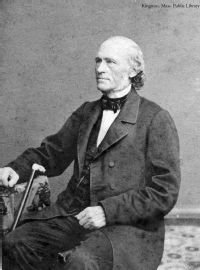 One of Topeka’s current landmarks, Washburn Univeristy, was founded as Lincoln College by members of the Congregational Church in 1865. The college floundered for several years until a substantial backing from Ichabod Washburn in 1868 turned the college around and it was renamed Washburn University. Sadly, Washburn died from complications from a stroke before he was able to visit his namesake.

Topeka became a railroad city in 1868 when construction began on the Atchison, Topeka and Santa Fe railroad system. In the 1940s the railroad was immortalized in a song written by Judy Garland for the movie The Harvey Girls. The movie was based on a popular restaurant chain, the Harvey House, which opened its first restaurant in the Santa Fe Depot in Topeka in 1878.

The city stuck to its anti-slavery roots in the 1870s as Kansas and Topeka saw a growth in population from a group of former slaves known as Exodusters. The area that they settled in was known as Tennessee Town, a nod to their former residence. The first African-American kindergarten west of the Mississippi was organized by Dr. Charles Sheldon in Tennessee Town in 1893.

The Topeka Public Library was opened on the Statehouse grounds in 1883. After the Kansas Legislature voted for the library to be moved off the Statehouse grounds, a modern library was built in the 1950s and this amazing building (pictured below) was demolished. Other Topeka landmarks, Gage Park and the Governor’s Mansion (8th & Buchanan) were built in the late 1800s. Topeka also got its own baseball team, the Topeka Golden Giants, during this time. 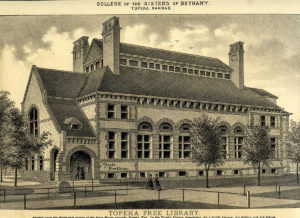 Topeka enjoyed a boom of construction, growth and development in the 20th century. Many schools and colleges were built and opened including Bethel Bible College in 1900, Hayden High School in 1911, Sumner Elementary School in 1936 and Cair Paravel-Latin School in 1980. Topeka saw a growth of hospitals and medical facilities like the Bethesda Hospital in 1906, St. Francis Hospital in 1909 and the Menninger Clinic in 1920.

Many businesses and cultural attractions came to Topeka and became a part of the landscape. The Jayhawk Theatre opened their doors in 1926, the Topeka Zoo opened in 1933 and the Kansas Museum of History opened in 1984. West Ridge Mall became a popular shopping destination after opening in 1988. Things that brought Topeka into the national spotlight also took place. Brown v. Board of Education was decided in 1954 and in 1955 the Westboro Baptist Church opened. 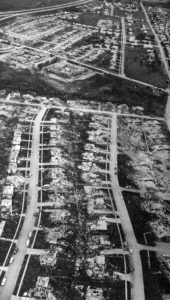 The century wasn’t all about growth. In 1966 a massive F5 tornado tore through the city, ripping a 22-mile-long path through Topeka. The tornado destroyed or damaged every building on Washburn University’s campus and totally decimated an 8-block path in central Topeka. Winds were believed to be around 250 mph and the fierce twister lasted around 26 minutes. Factoring in inflation rates, it is believed that this tornado is still one of the costliest on record, at a modern rate of $1.8 billion dollars.

Topeka is still a vibrant and growing city. The city honored its history by opening the Brown v. Board of Education National Historic Site in 2004 and reforming the Topeka Golden Giants baseball team in 2005. The North Topeka Arts District (NoTo) was formed in 2008 and is a popular destination for locals and visitors. Historic properties are being renovated to historical originality and reopened for the public to enjoy including the Dillon House, which re-opened in 2014. Downtown Topeka is seeing a flurry of construction and new businesses, with places such as the Cyrus Hotel and The Pennant (a nod to Pennants Cafeteria, housed in the same space in the 1940s) slated to open in 2018. The Topeka and Shawnee County Public Library is going to celebrate its sesquicentennial (150th) anniversary in 2020.

Learn more about the city and the history of the area in the Topeka Room on the second floor of the library .