Charles Monroe Sheldon was known by many different titles: pastor, social justice warrior, prohibition campaigner, author and editor. He is famous for his book In His Steps, which is a collection of short stories that turned into the “WWJD” (What Would Jesus Do) movement. Sheldon also did work in Tennessee Town, traveled all over the world for prohibition reformation and advocated for world peace.

Charles Sheldon was born on Feb 26, 1857, in Wellsville, New York. He went to college in Massachusetts and graduated from seminary in 1886. While preaching at his church in Vermont two very important things happen to him: 1) he learned about social gospel work and 2) he met a parishioner who introduced him to his future wife, Mary Abby (they married in 1891). 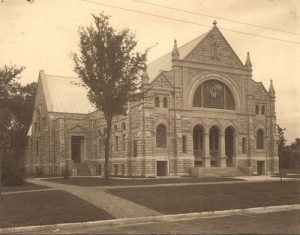 This parishioner also encouraged Sheldon to come to Topeka. The members of Central Congregational Church in Topeka hired him as their pastor in 1889. Prior to hiring Sheldon, the church had a small membership and existed in a small store building. With Sheldon at the helm, the membership grew from around 50 to more than 700. Sheldon quickly took to his leadership role and helped the congregation choose to construct a church at Huntoon and Buchanan.

Sheldon determined he would draw a higher number of younger listeners each week by sharing stories that had a dramatic cliffhanger, the ending would be shared the following Sunday. These stories turned into a 12-week series in a Chicago religious magazine and eventually turned into the work In His Steps, first published in 1896.

Sadly, the publishing house for Sheldon, Chicago Advance, failed to properly register the copyright for the book and other publishers took advantage. Sheldon lost out on unknown sums of royalty fees as other publishing houses published his book at a lower price. This drove the cost down and cut him out of any profit from anything not sold by Chicago Advance. Sheldon never spoke publicly about losing out on the profits. He only said he was glad his message could reach so many people. (The book is still published today and was made into a movie in 2015). He turned his focus to bettering the city of Topeka.

Working in and understanding Topeka

Sheldon was a great believer in doing the work of the person you’re trying to understand. To demonstrate this, he would spend one week at a time working at various businesses across the city. He worked in places such as railroads and various merchant shops to understand the problems or concerns of these businesses.

He did this during the economic downturn of the 1890s. Sheldon’s church also sponsored the first African-American kindergarten west of the Mississippi River. He credited the work he did with the “Exodusters” as some of his most important work to understanding the needs of Tennessee Town, an area of Topeka settled by freed slaves after the Civil War. 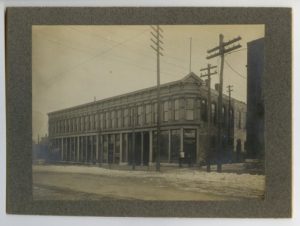 In March 1900 the editor of the Topeka Daily Capital challenged Sheldon to be the editor of the newspaper for one week. Popenoe, the editor, challenged him to run it “as Jesus would.” Sheldon took this challenge and saw circulation numbers rise by more than 335,000 subscriptions. For the week he ran it, he published no “hard” advertisements for products like liquor, tobacco or patented medicines. He also published the name of every single person who worked for the newspaper down to the janitor.

In 1920 Sheldon retired from Central Congregational Church to edit the Christian Herald. He became an advocate for world peace and prohibition. Sheldon also advocated for equality in the workplace and for women’s rights. He even worked on Alfred Landon’s Kansas gubernatorial campaign as an advisor and writer.

He traveled to Australia, New Zealand, England and Israel for various temperance, prohibition and religious trips throughout his later years. Sheldon suffered a stroke on Feb 17, 1946, and died one week later on Feb 24, 1946.

Find newspaper articles and writings about and by Charles Sheldon in the Topeka Room and our online databases. Request his and other prominent Topekans’ obituaries through the library’s obituary search service.