This April marks the 150th anniversary of the end of the American Civil War. This post is the third of four which highlight ties between Topeka and Shawnee County and national movements during and after the Civil War.

During and shortly after the end of the Civil War in April of 1865, African Americans began migrating into Kansas and surrounding states. Kansas’ longstanding association with freedom and the abolitionist cause attracted these displaced families as the South experienced considerable political and social upheaval during the post-war era. Risky prospects of tenant farming, epidemics of yellow fever and general aggression against former slaves created an insecure future for freed African Americans. At the same time, increasing expanses of Kansas were opened for settlement as the railroads blazed west towards the new frontier. 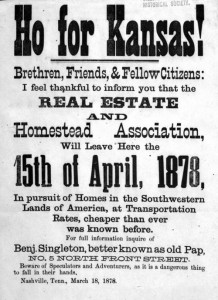 Some African Americans were enticed to settle in Kansas through the work of Benjamin “Pap” Singleton. Singleton, a former slave who had escaped to the north, encouraged ex-slaves (especially in his home state of Tennessee) to head west where they could purchase land and start a better life. Singleton recruited thousands of freed slaves to Kansas and helped establish the settlements of Baxter Springs and Nicodemus, with mixed success.

Political changes in the Deep South in 1878 dramatically restricted opportunities for African Americans. As a result, an estimated 25,000 left their home states and entered Kansas between the years of 1879-1881. Referred to as “Exodusters,” this influx of immigrants, many of whom were sick and had few resources, overwhelmed the state.

Exodusters typically arrived by steamboat in Atchison and Kansas City and then travelled west by railroad to Topeka. Topeka was the only city in the state of Kansas with an organized social welfare and resettlement program for the Exodusters. In May of 1879 Governor John St. John formed the Kansas Freedman’s Relief Association (KFRA), with the express purpose to provide “aid to the destitute freedman, refugees and immigrants” that were flooding the state. The organization was managed by two Quaker philanthropists, Laura Haviland and Elizabeth Comstock, and John M. Brown, an African-American school teacher originally from Mississippi.

Any government aid to the KFRA was scanty and the organization primarily operated on private donations alone. The KFRA built a temporary shelter in Topeka for refugees, known as The Barracks, on the north side of the river near the junction of several major railroads. Inside The Barracks were compartments for families which included double bunk beds and cook stoves. A make-shift hospital and commissary were located near The Barracks, as was a warehouse where materials for distribution were stored. 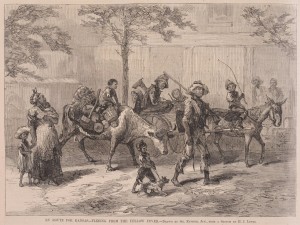 wage to provide skilled labor, such as carpentry, to the organization. Some immigrants who had come on their own eventually relocated to adjacent states. Most, however, came in family groups and were hesitant to split up. These families either settled in one of the communities established by the KFRA in Wabaunsee, Chautauqua and Coffey Counties, or stayed in Topeka.

African Americans staying in Topeka settled throughout the city’s five wards, with some concentrations in the 1st and 3rd wards. The community of Exodusters in the 3rd ward became known as Tennessee Town, in recognition of the state where a majority of the initial inhabitants originated. Once settled, many Exodusters provided skilled labor in the community, including carpentry and masonry work on the expanding state capitol building. Women and children often worked as domestic servants throughout the city. 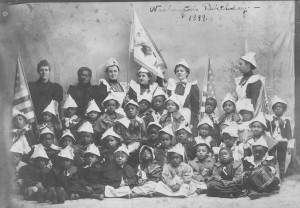 Over the years settlement in Tennessee Town expanded as houses were built and gardens planted. Churches soon spotted the street corners and schools were established. In 1893 Rev. Charles Sheldon established the Tennessee Town Kindergarten located in Central Congregational Church; it was the first black kindergarten west of the Mississippi River. Over the course of the next 15 years the school would provide services to over 200 youths before merging with Topeka Public Schools.

To learn more about the Exodusters in Kansas, visit the Topeka Room where documents concerning African American migration to Kansas, including census records, are available.

Michelle is a fifth-generation Kansan who has a passion for history, radical home-making and science fiction. When not on one of TSCPL's bookmobiles she can be found educating students at surrounding schools with dynamic programming.