Don’t miss Sounds of Space, Science of Pancakes, Science is a Real Sing-a-long, Readapalooza, Stories & Crafts, Borrow It Book Fair, Movie on the Lawn, NOTO Story Slam and ALL of the events this summer. Check out Curiosity Central and make plans to attend!

Learn the science of sound!

Sound is a type of energy made by vibrations. When any object vibrates, it causes movement in nearby air particles. These particles bump into the particles close to them, which makes them vibrate too, causing them to bump into more air particles. This movement, called sound waves, keeps going until they run out of energy. If your ear is within range of the vibrations, you hear the sound.

If you want to learn more about the science of sound hands-on with instruments you may have at home, use the descriptions of the instruments distributed at the Science of Sound program and how they produce sound as a starting point. 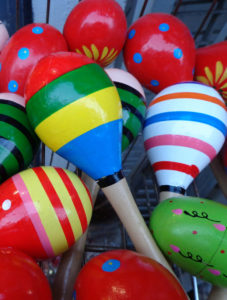 Shake it up! Maracas are a type of percussion instruments called idiophones.

When you shake the maraca handle, tiny balls inside the egg-shaped end of the maraca bounce against each other and hit the walls of the maraca. The materials of the instrument vibrate to make sound.

Hmmmmm! A kazoo is a type of musical instrument called a singing membranophone.

When you hum into a kazoo, the humming makes a wax paper membrane vibrate to make sound.

A flute is a type of woodwind instrument.
When you blow into a flute, sound is made from the flow of air across the openings. Cover holes to change the pitch of the sound.

Whoo! A party blower is a type of musical instrument called a horn.
When you blow into the plastic mouthpiece, the air is forced into the tube and out through the end of the sound chamber, which causes the air to vibrate. The force of the air also inflates and unrolls the paper tube, and the vibrating paper makes a second sound.

Preet! A whistle is a type of wind instrument
When you blow into a whistle air enters the whistle at one end. As the air reaches the other, closed end, all the air molecules “pile up” on top of each other and cause a high-pressure region. The vibrating air escapes out the little hole at the top making noise. The frequency of the sound waves are dependent on the length of the whistle. The longer the whistle, the lower the pitch will be.

A Sound Hose produces sound when you grab the larger end of the sound hose and – only if it’s safe to do so – quickly whirl the hose in circles over your head.
As you twirl the tube, air molecules are pulled from the end in your hand up and out of the moving end. The difference in speed between the moving end of the tube and the stationary, hand-held end creates a difference in air pressure that pulls air through the tube. The air’s speed changes with the speed of the spin.  Give it a whirl!

Shake it up! Rattles are percussion instruments.
The jingles hang loosely on the wire pin and jangle against each other, making a high-pitched rattling sound that carries well. When you shake the rattle, the metal discs bang against each other and the materials of the instrument vibrate to make sound.

Yes, you can make music with your nose. A nose whistle is a type of wind instrument
Press the nose flute firmly against your nose and mouth. The big part goes over your mouth, and the small part goes against your nose. Hold your mouth open. Blow air only through your nostrils, making sure that no air leaks form the edges of the nose flute. The sound is made as the air blows across your open mouth, and by adjusting the size and shape of your open mouth, you can create various pitches.

Shake it up! Hand clappers are percussion instruments.
When you shake the plastic hands back and forth, the hands “clap” against each other and the materials vibrate to make sound.