Providing Shawnee County with library services from one building is a challenge that requires creativity and commitment. March 15, 2018, marks the 75th anniversary of bookmobiles serving our community. Bookmobile service began in 1943 with a small, converted camper trailer pulled by a Chevrolet coupe, becoming the first traveling branch. This original library-on-wheels made 10 stops each week and held 1,200 books. As the service grew ever more popular, the library needed a way to meet the increased demand. It was followed shortly with a second mobile unit in 1947.

The car and trailer combinations made way for larger vehicles that could provide more amenities and carry more items. In 1951, the original traveling branches were replaced by two retired city buses nicknamed Ben and Betsy that had space for 1,500 books each.

By 1957 they were showing their age and in 1958 three factory-built bookmobiles were purchased. Along with good lighting and air conditioning the new vehicles could hold 3,000 items each. 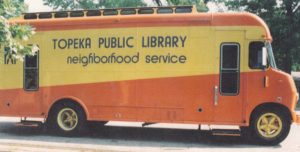 Through the years the community has seen many bookmobiles come and go. In the mid-’70s two new bookmobiles were purchased. At one point in the mid- to late ’70s the library’s outreach service included the Bookbuggy, a recycled postal truck that traveled neighborhoods ringing a bell to announce its arrival. People could flag down the bookmobile to stop in neighborhoods.

In 2014 and 2015 the Sherlock and Alice designed bookmobiles replaced the 1990s bookmobiles. The current bookmobiles hold upwards of 6,000 items each and make 23 stops around Shawnee County each week. More than 100,000 people visit a bookmobile annually keeping them an important part of the library’s mission of sparking curiosity and connecting the community through literacy and learning. People checked out more than 300,000 items on bookmobiles last year, which was about 15 percent of the library’s total circulation.

Share your photos with our awesome bookmobiles on social media #TopekaBookmobiles. Visit a bookmobile on April 11 for a free bookmobile shaped cookie! While National Bookmobile Day is part of National Library Week, we’ll be celebrating our bookmobiles’ 75th anniversary all year long. Watch for upcoming events. 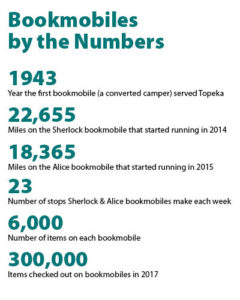 As the library’s communications editor Ginger helps spread the word about all the amazing library resources, services and staff. She loves reading fiction and is working to keep her To Be Read list under 100. Ginger is also a volunteer at Helping Hands Humane Society.