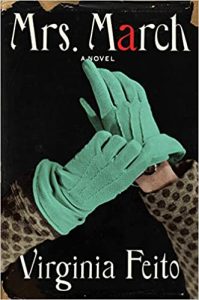 The episode to discuss Mrs. March by Virginia Feito is finally here! Prepare for spoilers!

Here’s what we know about the protagonist, Mrs. March:  She’s an extremely unreliable narrator. She’s not likeable. She’s the second Mrs. March, as she broke up her husband’s previous marriage. Mrs. March has a step-daughter she despises. She has her own child with Mr. March, but only out of spite for her sister.

The main character isn’t called anything but “Mrs. March” until the last sentence of the book, even in flashbacks as a strange, lonely child. As a child, she had a dark, imaginary twin named Kiki. She grew very attached to her family’s housekeeper until she started biting the housekeeper!

A girl in Maine goes missing and ends up dead. Mrs. March is so consumed with the idea that her husband is guilty of the crime, she goes to Maine and integrates herself into the dead girl’s life. This includes dancing with the dead girl’s boyfriend.

All in all, we agree the book is full of weirdness and Mrs. March is definitely crazy. However, the ending of the book was flat and the author just kind of dropped the ball.

Email us at podcast@tscpl.org to tell us your opinion of Mrs. March!

Recommended reading (books like Mrs. March you should read in addition to or instead of):

From Miranda: Kim Ji-young, Born 1982
From Chris: Woman in the Window
From Autumn: The Maid

Here are the books we discussed this time:

The next episode of The Bookmark drops November 22!

Autumn Friedli, Chris Blocker and Miranda Ericsson relish talking books with recurring readers and special guests from the library and community in The Bookmark.

Thanks for listening! We love to hear from listeners.

Elizabeth is a book nerd and fangirl. She’s passionate about the things and people she loves and is happy to hear about the things you love. Ask her about YA fantasy fiction and Doctor Who.