For those of you already addicted to Romance, Fantasy and SciFi, you will absolutely love Paranormal Romance. It’s a mixture of all three with romance as the main focus. Paranormal Romance is infinitely more diverse than Romance, Fantasy and SciFi, because it shares their wide variety of possibilities for plot, theme, setting and characters, but also pulls key elements from all three genres. Each novel contains the sizzling hot appeal of romance, while at the same time testing the boundaries of an alternate reality.

Take a look at my Top 5 Paranormal Romance Authors list for some popular authors in this genre. My number 1 favorite series in this genre is the Lords of the Underworld series by Gena Showalter.

The Darkest Passion by Gena Showalter 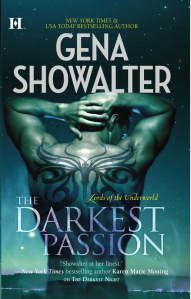 Image by Gena Showalter at: members.genashowalter.com

As part of an English class in high school, I read several Greek myths including the story of Pandora’s Box. Gena Showalter’s Lords of the Underworld series definitely strays from the classic myth, but she takes it down a darker path where demons are bonded to immortals. One of Zeus’s ex-warriors, Aeron, is forced to live with the demon of Wrath until he dies. In The Darkest Passion, an angel, Olivia, is sent to kill Aeron because he released a demon from hell. However, she is unable to follow through with it due to her feelings for him. She ultimately “falls from grace,” losing her immortality as well as her wings.

Aeron had always been aware of Olivia’s presence. Even Wrath sensed her heavenly aura and was instantly calm. Except, she was always invisible. She constantly followed his every move and when she finally revealed herself, he was absolutely mesmerized by her. Aeron had always been a withdrawn person, focused solely on the mission of separating the demons from the Lords. But, what do you do when an innocent, loving angel falls from heaven in order to save your life? Fight the desire of course. Olivia tests his willpower when she makes it known that she longs for him. Despite himself, opposites attract and he can’t help but want her back.

Check in next week for a second review. This is part 1 of a 5 part series.

4 thoughts on “Why you should read paranormal romance”