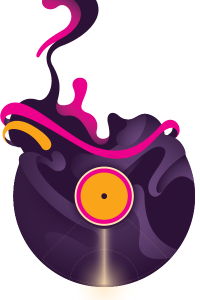 When most people think of funk music, they picture the 1970s and all the excess that went with it. Outlandish outfits, drugs galore and long jams about both spacey concepts and earthly delights. Basically, this Key & Peele sketch. But the funk torch has been carried through the years into different genres. Snoop Dogg and Dr. Dre brought George Clinton‘s Parliament–Funkadelic sound to rap music in the ’90s. Lots of bands have fused funk with alternative rock and world music influences too. Lately I’ve been listening to some of my favorite artists who have new albums out incorporating funk rhythms. Despite their eclectic styles, they all manage to create an upbeat, positive, smooth, easygoing experience. 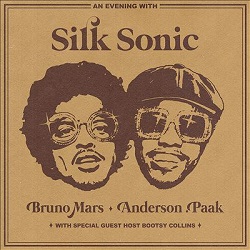 I was not a big fan of Bruno Mars early on. The pop star’s radio-ready hits weren’t my thing until “Uptown Funk” and “24k Magic” took over the airwaves. That’s when I realized just how savvy he was as a performer, expertly incorporating smooth retro-soul into modern hits.

I’ve been a fan of the distinct raspy voice of Anderson .Paak since he first appeared throughout Dr. Dre’s Compton up to his recent performance at the Super Bowl Halftime Show. The California native has a similar ear for funk. So it’s no surprise this new collaboration between like-minds landed the duo a Record of the Year Grammy for this album’s “Leave the Door Open.”

Clocking in at a cool 36 mins, An Evening with Silk Sonic is a  tongue-in-cheek tribute to West Coast Funk from the ’70s that doesn’t overstay its welcome. You’ll hear the influence of Marvin Gaye, Kool & The Gang and Earth, Wind & Fire all over this thing. The duo was so committed to recreating that era’s sound, they bought older drum skins and recorded the full band using a single microphone. As opposed to the individual instrument recording common today. The result is a group of energetic, full of swagger, sometimes explicit but always fun songs you’ll replay as soon as it’s over. 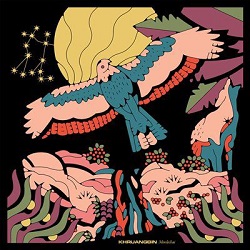 This trio from Houston, Texas, took their name from the Thai word for airplane and their music reflects an interest in world sounds. Listening through their 2020 album Mordechai you can hear a full passport’s worth of multicultural influences. One song will have Brazilian bossa nova percussion mixed with flamenco melodies, while the next will have a fuzzy Asian psychedelic guitar lead, followed by a slow Jamaican dub tune.

Groove is Khruangbin’s top priority and they can lock in to the coolest of them with ease (“First Class” and “Dearest Alfred” are my favorites). They’re less concerned with memorable choruses or hooks, with vocals sometimes an afterthought. Bassist Laura Lee pulls double duty as the main singer. Her vocals are often so ethereal and echoed you don’t catch the words (but it’s such a vibe you may not miss them). 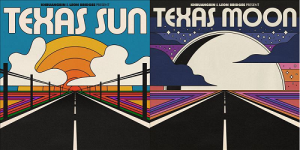 Enter fellow Texan Leon Bridges, who I previously covered here. The band collaborated with the Fort Worth native for two EPs, Texas Sun in 2020 and Texas Moon this year. Despite Bridges’ heartfelt vocals being quite the contrast from the band’s breezy and relaxed sound, the two mesh well. It’s clear the two talents have a direct influence on the other and find a middle ground on these albums. Bridges’ sincere soul keeps the band from floating too far out to sea and Khruangbin helps Bridges loosen up and slow down a bit from his solo sound. 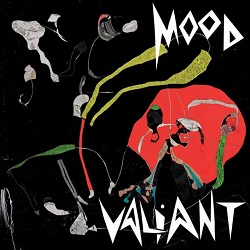 I’ve listened to this band the longest though I still can’t quite describe them. This four-piece band from Melbourne, Australia is just as eclectic as Khruangbin. Where they differ is the jazzy, restless and shifting quality of Hiatus Kaiyote’s songs. Rather than ride a groove into the sunset, Hiatus Kaiyote shifts time signatures and tones at the drop of a hat. Naturally this keeps listeners on their feet always wondering where songs will turn next. But we’re guided by an incredible vocalist whose stage name Nai Palm hints at her dynamism and explosive personality. She can switch from a croon to a shout to a whisper to a rasp in a matter of seconds.

Their last album Choose Your Weapon was a sprawling 18 song epic. References to anime, science and video game sounds kept things interesting and varied. But since then singer Nai Palm was diagnosed and treated for breast cancer, and this album takes a more sincere and intimate tone. However, it’s no less funky than before. The band sounds as cohesive and assured as ever, more mature even. In fact, they even pull in ’70s Brazilian tropicalia maestro Arthur Verocai for string arrangements on “Get Sun” (his self-titled album is one of my all-time top 10). That lineage is clear to hear when a band can fuse their influences as enticingly as Hiatus Kaiyote.

It’s easy to try to pigeonhole funk music into a retro stereotype. But it’s clear many artists and fans still love the style. Look no further than bassist Bootsy Collins narrating Silk Sonic’s album or George Clinton featuring on guest spots to this day. The spirit of funk music lives on in all kinds of genres around the world. There’s something here whether you want to dance or just kick back and relax.