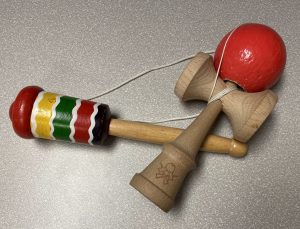 It’s fun to see different versions of the same games from all over the world. For example, the classic cup and ball toy is found in many cultures. In Colombia it’s called pirinola and in Mexico there’s a similar toy known as balero. In Japan, the toy looks slightly different and is called kendama, which means “sword and ball.” Watch this video with local enthusiast Kyle Werner to learn more.

Jump rope is another fun activity that looks different in various cultures. Jumping rope became especially popular in the United States in the 1930s because it was very affordable and didn’t require special equipment. It’s still popular. In China and Vietnam the jump rope is not twirled, but is held stationary around two players’ legs while a third player jumps in and out of the rope.

What are some of your favorite childhood games? Come and play these games and others with us at Día on Sat, April 30, 2022 beginning at 1pm. We’ll explore a variety of cultures in this family festival full of fun. In addition to playing games from around the world, you can watch performances and pick up a free kids book while supplies last.

Natalie is a Kids Librarian with a background in teaching. She delights in spreading bookjoy to people of all ages. She also takes interest in cycling, creating art, social justice, raising small livestock, and making music.