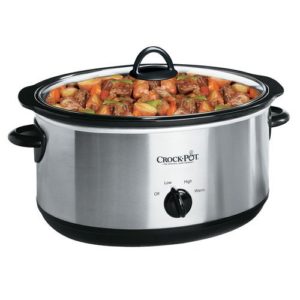 How often have I been running all over the place trying to get everything done and just wanted to come home to dinner already made? Well, truly, a lot. As a result, I’ve grown to absolutely love my slow cooker. Well, slow cookers. Let’s be real. I have more than one. I’m constantly using them. In some cases, I may have dinner cooking in one slow cooker and dessert in a different one.

The idea of a slow cooker is simple: it cooks the food at a low temperature for a long period of time. The amount of time a recipe can take varies. Most recipes I have used take anywhere from 3 to 10 hours, depending on what I’m cooking and if I’m cooking it on low or high.

Many slow cooker recipes are simple. Basically, you just take all the ingredients, cut them up, dump them in the cooker, mix them together and turn it on. Many slow cookers have options for setting a timer so that it doesn’t cook for too long and you don’t have to worry about setting a separate timer or not being there when it finishes to turn it off. My slow cooker turns to warm when the timers goes off, so I don’t have to worry about it getting cold. At one point, I owned one that would just turn itself off at the end of the timer instead to turning it to warm.

My mom used a slow cooker all the time when I was growing up and I would come home from soccer practice to the most heavenly smells. When I got married, my mom gave me a copy of the Fix-It and Forget-It Cookbook. It’s still one of my go-to cookbooks, particularly if I know I’m going to be facing a busy day. A personal favorite is the ham with scalloped potatoes recipe. It is so good. It takes a little more work because you have to cut up the potatoes into thin slices, but the result is totally worth it. Fair warning though – it makes a lot of food. If you don’t have at least a few other people helping you eat it, be prepared to have a bunch of leftovers.

What are some of your favorite slow cooker cookbooks or recipes?