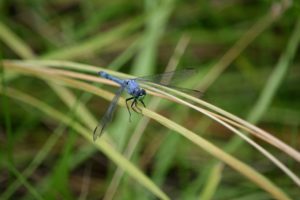 On a recent slow walk I found seasonal change evident and exciting. Butterflies are on the move searching for food sources and resting spots, sharing space with bees and other pollinators on the late season flowers of the Goldenrod and Tall Boneset. I unexpectedly discovered a lifeless Eastern Pondhawk dragonfly hanging in a deteriorated orb weaver web at eye level. This gave me my first up-close look at a dragonfly. I could see the veined and powerful wings, worn and broken, sparkling against the backdrop of decay. Even without a camera lens or binoculars I could closely study all the unique physical attributes of a dragonfly.

The life histories of dragonflies are as intriguing as their names and physical structure. All North American dragonfly species (331 species) need healthy freshwater habitats for survival except the Seaside Dragonlet, which breeds in waters with high salt content. During the immature stage as nymphs, dragonflies live underwater from one to three years. They are fierce predators, with a vicious lower jaw that juts out to quickly snatch aquatic prey such as tadpoles and mosquito larvae. The nymphs are also food for fish and amphibians. 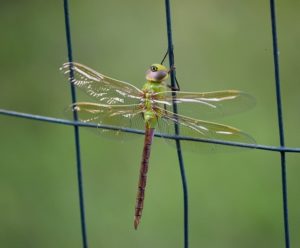 On land the adults feed on insects and are prey for other dragonflies, spiders and birds such as the Mississippi Kite. Dragonflies are an important part of our environment and are studied to determine the health of aquatic habitats. Some dragonfly species such as the Common Green Darner migrate long distances. The Migratory Dragonfly Partnership was formed to gather data, study and conserve North America’s dragonfly migration.

During these waning days of summer, watch for dragonflies in the Skimmer family (Libellulidae) such as the Eastern Pondhawk, the Widow Skimmer and the Halloween Pennant (3 of the 80+ dragonfly species in Kansas). These dragonflies exhibit perch and hunt behaviors. Like a Scissor-tailed flycatcher, they fly out from their perch to catch an insect and may return to the same perch repeatedly. Identifying dragonflies can be tricky. Review the species found in our area, their wing patterns, colors and habitat preferences. Photograph or use binoculars to help you accurately identify them. 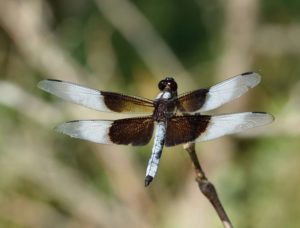 Note the complexity of a dragonfly’s thorax. This is its “power center” where three pair of legs used for perching and holding insects are attached to the bottom and two pair of wings are attached to the top. Each wing is connected separately to the thorax enabling extraordinary maneuverability for expert in-flight hunting. Dragonflies’ strong wings extend to the sides horizontally while at rest, versus held closed above the body as with damselflies. Notice that the abdomen has segments allowing the body to bend. Then focus on the dragonfly’s two huge compound eyes, each eye consisting of 30,000 simple eyes giving dragonflies better vision than any other insect. While their predatory behavior and silent darting around may seem intimidating if they get close, they cannot sting and are harmless to humans but may bite or pinch when held in your hand.

As a Public Services Specialist, in addition to Reference work and serving on special project committees I enjoy promoting and coordinating nature-themed programs for adults and families. My interests include hiking trails locally and in National Parks, reading about and traveling to Alaska, Sandhill Crane migration, Monarch waystations, and volunteering as a certified K-State Extension Master Naturalist (2014-present). Peter Matthiessen's Shadow Country is my all-time favorite novel.