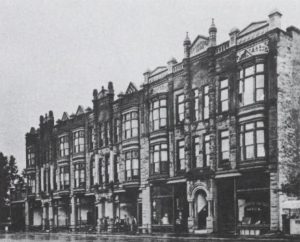 Downtown Topeka businesses get the most attention, which makes sense as that was the main location for shopping and office buildings until the rise of malls in the late 20th century. We have two issues of the Bulletin that are specifically about Kansas Avenue and downtown Topeka:

Look in the “central business districts” subject category on the left side of the Bulletins webpage for more articles about downtown. Review “business enterprises” or the specific type of business, such as “theaters,” for information about individual businesses.

I started out reading about the history of the Jayhawk Theater, which opened in 1926 showing silent films. However, I ended up learning what was meant by “arcade” in the ’20s. The “Jayhawk Walk” is described as an arcade connecting the theater exit to the Crosby Brothers (often written Crosby Bros.) department store. I pictured video games and Skee-Ball, despite knowing that there was no Ms. Pac Man in 1926. Then I read the whole article. 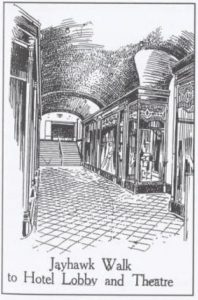 It turns out the arcade was an extensive window display for the department store, with separate sections for each department. This was placed along a “broad interior highway, paved with mosaic tile and vaulted overhead with a stipled metalic surface, studded with automatic fire sprinklers and lighted by recessed and hidden globes that throw over the whole a rainbow effect of colored lights.” Mr. Crosby had a financial interest in the theater, the Jayhawk Hotel, and the store. So the arcade was probably a worthy addition to the complex. There are articles about all of this in issue no. 79. If you use the search box, you’ll find many more related articles elsewhere in the Bulletins. 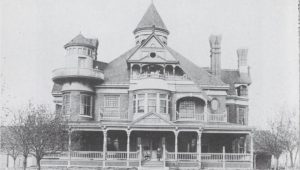 “Belvior,” built in 1884 by John D. Knox, banker, north of Potwin Place as a honeymoon home for his bride. When razed in 1919 much of the lumber was used in building several homes on the site.

If you’d prefer to look at and read about old homes in Topeka, there are loads of them in the Bulletins. Houses are listed in the subjects list under “dwellings.” Several issues feature nothing but houses. Many of the articles have drawings or photographs and describe the history and architecture of the building itself. They also share biographical information about the home builders and residents.

Garlinghouse was a company that sold house plans at prices accessible to middle class folks across the United States, not just in Topeka. Some of the houses are plain and fairly small. There are also larger and stately Garlinghouse homes. Some houses fit what I think of as a traditional bungalow and some don’t. Check them out and see if you can pick out Garlinghouse homes next time you’re driving through town. 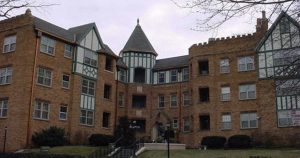 Several issues of the Bulletin are about individual neighborhoods (Potwin, Oakland, North Topeka) and they include businesses and homes in those areas. The Holliday Park issue, no. 80, includes information about apartment buildings, which were becoming more popular around the same time the Jayhawk Theater and Hotel opened. As an apartment dweller myself, I was curious about what they had to say. The article “Rush into flats,” originally published in 1906, describes several new apartment buildings in popping up in Topeka and the author speculates why they might be popular:

“Probably the greatest reason for the popularity of this mode of living is that it pleases the mistress of the establishment. The women say that apartments minimize the drudgery of house work and are more economical. Many have gone into them to avoid the ever vexatious servant problem. Worn out with the excitement of having to break in a new girl every few weeks they have hailed the flat as a haven of peace. Here, on account of the modern conveniences and compactness, they can get along with fewer rooms and thus are enabled to do the work themselves.” 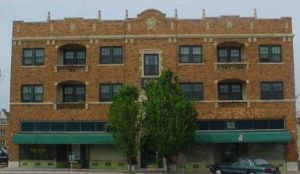 Well, I don’t think vexatious servants are something people can relate to anymore! But I do appreciate not having to mow a lawn, as male apartment dwellers did, according to the article. It also mentions  downsides of living in apartments, such as poor ventilation (before central air conditioning) or disagreeable neighbors. Other than a quick mention of apartments being “more economical,” the article doesn’t mention the cost of housing and whether apartment dwellers could afford a house. Other articles talk about how the apartments were usually occupied by young couples or single people. The assumption seems to be that young people would eventually get married and be able to buy a house. 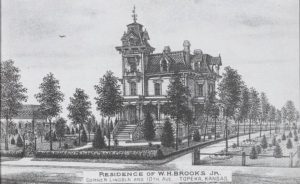 My final tip for getting the most out of house and building information in the Bulletins is to use the search box. There are lots of listings by specific street or exact address so try searching that way. Searching by the name of a business will get you all the mentions throughout the Bulletins, not just the issues I’ve highlighted. Don’t forget, ask us at the library if you don’t find what you’re looking for!