For the past several months I’ve been writing about the Shawnee County Historical Society’s Bulletins, which focus on the first 100 years of Shawnee County history. Today, we’re going to the mall. Topeka’s White Lakes Mall has been in the news a lot during the past few years. These recent stories have been about its changes in ownership and physical deterioration.

As of this writing, the mall is being torn down, which will be the end of its history. But what was exciting about the mall when it was new? What led to the rise of malls in general? What were the circumstances in Topeka in particular? Last but not least, what sources are available to find out more about White Lakes Mall? 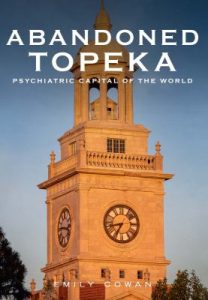 The source that first sparked my curiosity about the history of White Lakes Mall was the book Abandoned Topeka: Psychiatric Capital of the World by Emily Cowan. In addition to chapters about the Menninger Clinic and the Topeka State Hospital, there are several about other abandoned buildings in Topeka including White Lakes Mall. The book gives a brief history of the mall from its beginning through the arson fire in December of 2020. What makes it special are the photographs showing the groundbreaking in 1963, its peak in the 1970s and its abandoned state in the past 20 years. Before this, I’d only seen recent pictures of the dilapidated mall. Seeing these older pictures made me want to know more about when the mall was a happy place.

Let’s go a little further back in the past. I wanted to see if the Bulletins mentioned White Lakes at all and to my surprise they did. Before the mall, there was White Lakes Golf Course, described in this article about golf courses in Topeka. It opened in 1933. Since the golf course was owned by Joe White and there were lakes on the golf course, the name “White Lakes” was logical. The golf course was gone by 1954. By 1963 a mall was in progress with the same name.

For my next step, I thought about where to look for stories published about the mall in the 1960s and 1970s. I looked at some news articles in the library’s biography and subject files. (You might also hear it called the “vertical file,” which just refers to the type of file folders used.) This is a collection of news clippings, photos and other small, printed items. It doesn’t have everything ever written about a topic, but covers a lot of popular local people and things. These files are also relatively easy and fast to use.

I found the folder for White Lakes Mall under “Shopping centers.” Since I knew from Cowan’s book that Sears and Penneys were the major department stores, I found their folders under “Stores.” In these folders are newer articles, marketing pamphlets, architectural plans, and articles from the 1960s and 1970s describing the mall and its plans. Just what I wanted!

Benefits of a mall in Topeka

According to articles in the Topeka Daily Capital and the Topeka State Journal between 1962 and 1964 (mall opened in Oct 1964), people were excited about the following:

These factors are true of malls in any location, except that many larger cities would have already had escalators. I wanted to think a little deeper. What was going on in Topeka and the world that brought about the popularity of malls and White Lakes in particular?

The beginning of malls

Pennys storefront at While Lakes Mall 1967

Starting in the late 1940s Baby Boomers were born. After World War II there was a population explosion and cities grew and expanded. During that same time, more and more people were buying cars, which let people easily travel between work and home. All over the U.S., downtowns remained centers of business. However, shopping, dining and entertainment spread into the suburbs where people were choosing to live. In Topeka the population had been growing steadily from the city’s beginning in the 1860s all the way through the 1970s. Topeka’s population was nearing its peak at the time White Lakes Mall was built.

Topeka’s downtown was also changing. One of the articles I found in the subject file is called “Sears and Topeka,” originally published in the Topeka Daily Capital on June 26, 1962. It appears to be an editorial praising Topeka’s development potential and choices up to that point. The article said, “the decision to erect the new building is an expression of confidence in Topeka’s destinies.”

Destinies is a notable word choice here. It usually refers to an unavoidable fate and sometimes one ordained by God. It seems a bit serious to use in regard to department store locations. Besides, it wasn’t the hand of fate, it was the Topeka city government’s Urban Renewal plan that supported the mall. Sears already had a store in downtown Topeka and wanted to expand in that location. 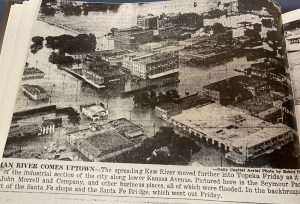 Photo of 1951 flood taken by Topeka Daily Capital & included in Thomas Rodriguez’s book The Bottoms: A Place We Once Called Home

In 1956 Interstate 70 connected Kansas City to Topeka with a stretch of highway running through downtown. At the same time the city of Topeka had a plan to make what it considered to be additional improvements to the downtown area. One of these was the demolition of “The Bottoms,” a community that included many Black business and home-owners. This area had been severely damaged in the 1951 flood. The downtown Sears location was boxed in between the highway immediately to the west and The Bottoms to the north with no room for expansion. Destiny, or local politics, made it necessary for Sears to move. This gave developers the opportunity to build a mall with Sears as its first anchor store.

White Lakes Mall continued growing at least through the late 1970s. One article from 1978 describes an expansion to add space for four more shops. Other articles around the same time describe adding kiosks to the center of the mall to have room for additional businesses. While many malls carried along doing business more or less as usual until online shopping came along around the turn of the century, White Lakes met an early demise. In the 1980s the southwest part of Topeka became more populated. The larger, newer West Ridge Mall opened there in 1988. White Lakes struggled to reinvent itself but ultimately is becoming part of Topeka’s history.

If you want to know about White Lakes Mall’s more recent history, log into Newsbank through the library’s website to access the Topeka Capital-Journal from 2017 to the present. https://infoweb.newsbank.com/apps/news/easy-search?p=NewsBank

The library has several copies of Abandoned Topeka you can checked out, and one in the Topeka Room you can look at in the library. You can get a preview on the Abandoned Kansas website.

The Biography and Subject files are physically located in the Topeka Room. They are on the west side of the suite (turn left after coming in the main door of the Topeka Room). If you’d like to get a feel for what’s in this collection, visit the subject index.