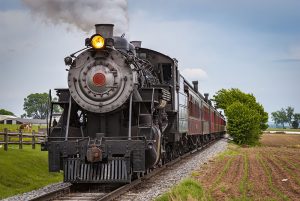 A few folks have encouraged me to write about the local history of trains and the railroad. Readers, I haven’t done this before because the amount of railroad history in Topeka is incredibly daunting! The very founding of Topeka is connected to the railroad, starting with Cyrus K. Holliday. He both founded the town and wrote the charter for the Atchison, Topeka and Santa Fe Railway. Topeka’s railroad connection is still strong with Burlington Northern Santa Fe Railway’s local shop and the Union Pacific Railroad Passenger Depot, the Great Overland Station. I know there are plenty of railroad experts around, but I’ll walk you through my process when I knew next to nothing on the topic. You can help me decide where to go next.

First I needed to find out what was going on with railroads in the rest of the U.S. leading up to the time Holliday arrived in Kansas. Overviews are the boring part of history to me. I love the details and whys and obscure facts. Getting a general overview takes me back to high school, when I thought history was really pretty boring. I later realized that was because everything was an overview! However, before you can learn details of history, you need to know the obvious parts. So I spent some time skimming articles, and instead of looking for buried tidbits like usual, I tried to focus on major events. I’ll sum up some key points. 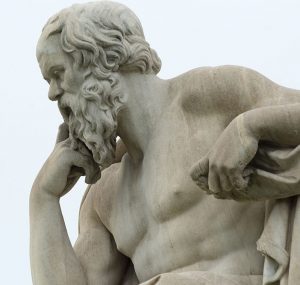 As with most of history, the ancients did it first. Ancient Greeks used wheeled carts on tracks pulled by animals or people as early as 600 B.C.E. Western Europeans used a variety of trams and wagon systems in the mining industry from the 1500s.

The modern age of trains began in the early 1800s with steam trains and took off after the creation of wrought iron in 1820. That type of iron is sturdy enough to be used as train rails. Improvements in the metal processing also lowered the price of the tracks themselves. Most early rail technology was developed in Great Britain. It was used in the U.S. starting around 1826 in the Northeast and spread throughout the states and territories east of the Mississippi River. Some train systems were interlinked, but some, especially in the South, were isolated lines that only went to and from one place. For instance from a cotton growing region to a port where it would be shipped by boat. (Before trains, most transport was by water, and not every location has a convenient river or canal.) 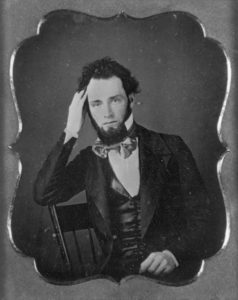 Now we can get back to Kansas, which was made a U.S. territory in May 1854. Cyrus K. Holliday arrived in Lawrence in October 1854. On December 5, 1854, Holliday and eight other men agreed to establish the city of Topeka. (The others were F.W. Giles, Daniel H. Horne, George Davis, Enoch Chase, J.B. Chase, M.C. Dickey, Charles Robinson and L.G. Cleveland.) They were doing all this as fast as they could to ensure the Kansas Territory would remain a free state where people of African descent could not be enslaved.

From the little I’ve read about Holliday so far, I get the impression he had the railroad in mind as soon as he arrived in Kansas. However, there were major interruptions. He wrote the charter for Santa Fe Railroad in 1859. But in 1860 there was a terrible drought that affected the food supply and discouraged people from coming to Kansas. In 1861 the Civil War began. During the war Holliday was adjutant general of Kansas. I had to look that one up! It means he was the head administrative manager for the state. Holliday’s recruited soldiers and managed supplies sent to the front lines. A great deal of planning for financing the railroad also went on during this time. You must to be able to pay for it to build it.

It wasn’t until 1868 that Holliday and others broke ground for the Santa Fe Railroad. At this point, there are many branches into railroad and local history I could follow to learn more. The following are a handful of ideas.

What to research next

Biography of Cyrus K. Holliday and other figures

Most of what is written about Cyrus K. Holliday is about his work in the railroad business and in local politics and government. The library has a biography focused on Holliday’s personal life in the Topeka Room collection. It’s largely based on letters written to his wife Mary during periods of time when they were separated. It could be interesting to find out more about what he was like as a person.

Holliday was involved in using land grants to encourage people to move to Kansas and use the newly built railroad. I know land grants have something to do with the government giving land to people who are willing to move to unpopulated places. How did that work exactly and who were the people who came to Kansas?

Railroads in politics and government

Holliday was the first mayor of Topeka as well as the founder of Santa Fe. How did laws and government policy affect the railroad and vice versa?

There’s loads of information available about the founders of the railroads, but who did the actual labor? What were their jobs like? What was life like for them in Shawnee County?

The Santa Fe was not the only railroad started right after the Civil War. It had lots of competition. Who were the competitors, and how can you tell who is winning at railroad business?

What developments in train technology affected the railroad in Shawnee County?

During the time when passenger trains were the most popular way to travel in the United States, the trains themselves were streamlined and the interiors were decked out in luxury. It’d be neat to find out what these looked like and to look for commentary from local people in newspapers from the time.

Where were Shawnee County’s train stations? What amenities did they have for passengers? Some no longer exist, what happened to them? 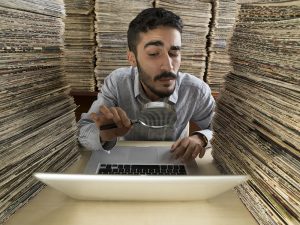 Where might I look for more information on these topics? I used the library’s website to log into Britannica Library to find overviews and basic information for this article. I’ll continue to do that for general train history.

For local history, I remember articles in the Shawnee County Historical Society’s Bulletin about Holliday and Santa Fe. As I mentioned before, the Topeka Room has a biography of Holliday, and I know there is more on railroad history there. Cyrus K. Holliday himself was the president of the Kansas Historical Society in 1891! They have all kinds of related sources. I’ll also use Newspapers.com with my library login to see what the local media was saying at the time.

Over the next few months, I plan to explore more about the railroad in Kansas. If there’s a topic you’d particularly like to know about, please leave a comment below or send me an email and I’ll gladly consider it!