In the late 19th and early 20th century, technology and ideas were moving at rocket speed. Bicycles, cars, planes, telephones and movies were all first invented in the 1890s. Chemists and scientists were discovering helium and other elements. At the same time, Topeka had its fair share of inventors and innovators. Read along to learn more through  four brief biographies of men associated with Topeka who created, built, thought things up and solved problems. 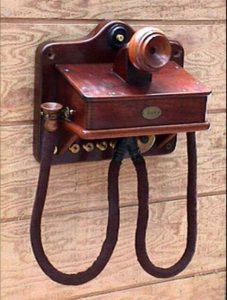 Once upon a time, way before cell phones, you couldn’t dial people directly from your telephone. Phones didn’t even have dials or buttons. Instead, you had to pick up the receiver and tell an operator what number you wanted and they would dial for you and connect you to the other person. Explore these pictures of phones before they had dials.

Whenever someone called for Strowger, she connected the phone line to her husband instead! Strowger was upset by this because he didn’t want anyone else to interfere with his business. So, he started thinking about how to make a phone that didn’t need an operator.

He eventually moved to Chicago, where he wasn’t the only one working on telephone switches. He partnered  with Joseph Harris, and in 1891 they patented the Strowger Automated Telephone Exchange. The first three digits of the pho 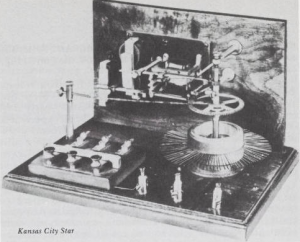 ne number dialed connected to the exchange, and the last four digits switched you to the person you’re calling. No sneaky operators required!

If you want to read more about the development of the telephone switch and Strowger’s life, “The girl-less, cuss-less, wait-less, telephone” by Mary Rowland in Bulletin of the Shawnee County Historical Society has it covered.

Strowger died in St. Petersburg, Florida, in 1902, and was only recognized for his important contribution to technology after his death. 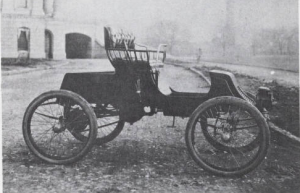 Terry Stafford ran a bicycle shop in Topeka. In 1900 he read an article about automobiles, which changed everything. By August of that year, he had built an automobile by adding an engine and steering to what used to be a horse-drawn buggy. Stafford did this even though he had never seen a car in person!

Stafford excelled at mechanical things, but he wasn’t a good businessman. He joined forces with Anton and Clement Smith, who were previously in the business of designing and making artificial limbs. Together they built three models of automobiles in their factory located at 10th and Jefferson in Topeka between 1902 and 1911.

Smith cars were known for their luxury quality. According to the Bulletin of the Shawnee County Historical Society, by 1904, a local journalist wrote that, “The Smith cars of 1904 were so nearly perfect there was ‘slight chance of any serious changes being made in automobile construction.’” I’m really glad he was wrong and we aren’t still riding around in “horseless buggies.”

Nevertheless, these were very nice cars for the time. They cost around $2600, more than three times as much as Ford’s Model T, and the equivalent of about $70,000 today. As people chose more affordable cars, the Smith Automobile Company eventually went out of business. Stafford continued working in the auto industry, but never had his own business again.

Terry Stafford and the first automobile in Topeka

If you think of Kansas and aviation, you might think of Wichita and Boeing. But it turns out that aircraft were being built in Topeka only a few years after the Wright brothers flew the first plane in 1903. 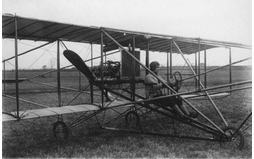 Albin K. Longren was a member of the Kansas National Guard, and helped with an airplane demonstration in Clay Center in 1910. By 1911, he’d built his own plane, called the Topeka I. (Do you see the trend here of inventors building things they were barely familiar with? Stafford did something similar and Longren made something totally new.)

Kansapedia’s longer biography of Longren says after he built his plane, he became a barnstormer. I had to stop reading and look up what that was. It turns out that in the very early days of planes, they didn’t have many uses. The Wikipedia entry about barnstorming says the only other two things planes were used for at the time were mail-carrying and smuggling. (By the end of World War I in 1918 they were also in use by the military.) Needing a way to make money with their planes, pilots would travel around the country, doing stunt shows and giving plane rides for a fee. They were called “barnstormers” because the pilots used farmer’s fields as landing strips.

After barnstorming for a while, Longren opened his own plane building business in Topeka. This article on factories in Topeka has details about the three different downtown Topeka locations where he worked over the years. These were not large production- line-type operations like you might think of when picturing airplane manufacturing. Instead, everything was built by hand, from the propeller to the tail. Longren ended his business in 1926 due to lack of sales, but stayed in the aviation industry for the rest of his career.

You can go and see the only remaining plane that Longren built at the Kansas Museum of History, or at this link: Longren’s biplane

Samuel Crumbine and the fly swatter

Unlike our previous three mechanically inclined inventors, Dr. Samuel Crumbine, physician, didn’t build anything. Instead, his innovations in public health helped increase life expectancies in Kansas and beyond. He started his career in public health in Dodge City. After gaining a reputation for successfully discouraging the unsanitary habits of cowboys, Governor Willis J. Bailey chose Crumbine to become secretary of the Kansas State Board of Health in 1904, and he moved to Topeka. His top three claims to fame were:

This all seems obvious to us now. Who wants to use a cup that a bunch of strangers already used? Ew! But, at the time, the idea of germs was just surfacing. Dr. Crumbine’s new ideas had a positive impact on keeping people healthier, especially children.

This article about Dr. Crumbine in Topeka goes into more detail about Crumbine’s work, including his eventual politically driven downfall. It doesn’t mention the one seriously bad thing he was associated with, which is eugenics. Eugenics is the practice of controlling human reproduction in an attempt to create a better human race. Unfortunately, this was not an uncommon way of thinking in the 1920s. It fell out of favor during World War II, when the Nazis used it as justification for murdering anyone they saw as inferior. It’s an upsetting topic so I’ll leave it to you as to whether you’d like to read more. This article from the Emporia Gazette describes the attitudes of Crumbine and others in Kansas at the time: Dark side of Kansas history

What eventually ended Crumbine’s role in public health policy in Kansas was something that’s still somewhat controversial today– sex ed, or as they seem to have called it in 1920, “social hygiene.” He began a campaign against venereal disease and worked with soldiers during World War I. He wanted to expand his campaign to teach high school students the basics of sexual education (and therefore how to avoid such diseases). The governor and others in power disliked this idea so much, they revoked his funding. He moved to Washington, D.C., and continued his career in public health outside of Topeka.

The Kansas Health Institute has images of some of the advertisements that Crumbine used in his campaigns.