I’ve noticed there is a lot of material about clubs and societies in the Bulletins of the Shawnee County Historical Society. I took a closer look at the social lives of Topekans in the late 19th and early 20th centuries.

There were so many clubs. I found clubs for literature, dancing and music, charitable work or fundraising, discussion of world events and clubs with secrets. There were clubs for children, adults, men, women, African Americans, Russian Germans (often called “Volga Germans”) and other ethnic groups. Topeka also had clubs purely for socializing and clubs for learning or practicing a skill. Some clubs hosted suppers and dances and invited the public. Even the first libraries in Topeka were organized as private clubs and books were only available to members.

It sparked my interest that a lot of the clubs were separated by gender. I compared men’s and women’s clubs of the late 19th and early 20th centuries to see what they had in common and where they differed.

Both women’s and men’s clubs studied serious topics and had cultural entertainments. At the women-only Nautilus Club, “Members were instructed to give papers that were not merely historical but provocative of thought and discussion …” Early papers evoked much heated discussion. In a 1894 paper on “Health and Women’s Corsets” the author said, “With the vital organs corseted and with heavy skirts hanging from the hips, disease finds easy victims and makes a woman the weaker vessel.”

The Minerva Club for women was named after the Roman goddess of wisdom. Its first meeting consisted of presentations and discussions of music and literature (specifically, the author Washington Irving).

Men probably didn’t discuss corsets, but the meetings of the Saturday Night Literary Club and the Fortnightly Club, both men’s clubs, had much the same format as the women’s clubs. A member presented a paper or essay and then the group discussed and debated the issue. Topics ranged from the international to the local. For instance the Fornightly Club had a discussion about beautifying Topeka. 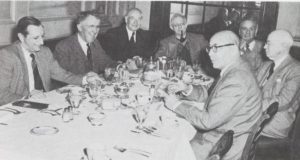 All clubs were proud of their prestigious and well-known members. The Naked and Unashamed Club was founded by Dr. Karl Menninger and others in 1921. They boasted of their membership of doctors, judges, lawyers, journalists, university professors and at least one former governor. According to Nyle H. Miller, “Members considered their new club primarily a philosophical discussion group. They claimed to strip themselves of all inhibitions, and were not ashamed of anything said in their luncheon discussions which sometimes raged on into the mid-afternoon.”

Articles about women’s clubs also list their prominent members. However, it’s harder to get a picture of what the members were truly like. In the late 1800s and early 1900s articles usually identified women only by their husband’s name – “Mrs. [Husband’s first name] [Last name].” In an article about the Nautilus Club originally written in 1944 it’s difficult to find out women’s first names, much less any biographical information. They definitely weren’t thinking about what future historians would want to know!

The Nautilus Club mentions Mrs. Charles M. Sheldon, the wife of the well known Congregational minister, activist and author of In His Steps. I was able to find that her name was Mary Abby (Merriam) Sheldon. The Kansas Historical Society has some of her writings, but otherwise I’m not able to find anything about her using my usual library and Kansas Historical Society sources. In an article about her daughter Margaret, I discovered Mrs. L.D. Whittemore, the first president of the Nautilus Club and a member of Western Sorosis, was Francis (Davis) Whittemore. Francis Whittemore was also the director of Washburn University’s art department. These ladies of Topeka deserve to be remembered for their own achievements as well as who their husbands were.

The biggest difference I noticed between men’s and women’s clubs is that many women’s clubs had a charity component. They were either fundraising or volunteering directly in the community. Women’s clubs had all kinds of charitable purposes from providing books and classroom supplies to children in Topeka, to funding new wells in Sri Lanka. 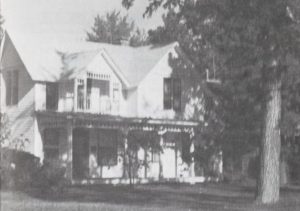 The City Federation of Art Clubs (later the Topeka Council of Colored Women’s Clubs) organized in 1901 to bring together members of eight different clubs. They hosted social and educational events as well as charitable benefits for the African American community. Racial discrimination prevented African Americans from accessing the same community social and cultural events, and economic services as white Topekans.

The Zonta Club for business and professional women chose the Capper Foundation (which still provides services to people with disabilities in 2021) as its ongoing charitable project. By the mid-1980s Zonta had also provided funding for two wells in Sri Lanka.

I didn’t go through every single article, but I don’t see a single men’s-only club with a charitable goal in the articles I reviewed. The Fortnightly Club discussed beautifying Topeka, but the women’s West Side Forestry Club actually got out there and did some beautifying. The women pulled weeds and renovated a vacant lot (now known as Willow Park) in their neighborhood. 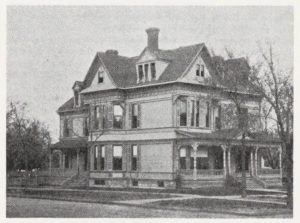 The article entitled “The Stag at Eve” opened my eyes to another purpose of clubs in late 19th and early 20th century Topeka. The Topeka Club was founded in 1889 by two local attorneys and occupied a grand house at 6th & Harrison. Prominent men belonged to this club including Governor S. J. Crawford, U.S. senators J. R. Burton and John Martin, U.S. marshals, railroad executives, state senators and bank presidents.

The club met for discussion, debate, games and social activities, as was and still is typical. The Topeka Club did not permit betting. Club bylaws also said, “The Club shall not purchase, own or sell intoxicating liquor.” Prohibition of alcohol took effect in Kansas in 1881. However law enforcement often looked the other way for private clubs.

“[A]ll was not smooth sailing for the Topeka Club as the following episode will show. In 1893 Police Chief Hank Lindsay announced that he was opposed to the operation of private clubs which permitted drinking on their premises, and would close them. He argued that private clubs were a guise by which members were able to maintain a place for the consumption of intoxicating liquor, a privilege which was denied to ordinary citizens. He did not name the Topeka Club but shortly thereafter made a raid on the club and arrested four of the members and the steward.” Although their case was dismissed, those arrested filed a lawsuit against the police commissioners and officers. The article only said there’s no record of a judgment in that case.

After Walter Stubbs was elected Kansas Governor in 1908, he quit the club because his political positions were strongly anti-alcohol. He didn’t want to be seen associating with such a group, despite its relatively distinguished membership. There’s even more, but I’ll let you read it for yourself.

I only found one reference to alcohol in articles about women’s clubs. The Nautilus Club spoke with the mayor about the “liquor question.” From the language I assume club members supported prohibition. I’ll also leave it to you to draw your own conclusions about what all this  says about gender roles 100 years ago. There’s plenty more about it in the Bulletins of the Shawnee County Historical Society.