Uncovering the stories behind historical events 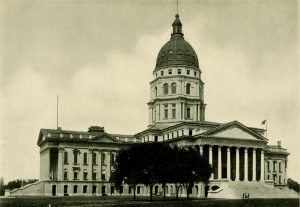 This month I decided to take a deeper dive into one of the stories that caught my eye in the Bulletins of the Shawnee County Historical Society. The article is “Colonel Hughes and the legislative war,” by William MacFerran, Jr. from Bulletin No. 17, Dec 1952.

The first time I read the article here’s what I got out of it:

In the next section of the article, MacFerran brings us to Jan 9, 1893, when the new governor Lorenzo D. Lewelling and legislature were inaugurated.

But there was a fight in the House. The Populists accused the Republicans, who had a majority, of having obtained 18 seats by fraud. Both parties organized in the House. The Republicans elected George L. Douglas speaker and the Populists elected J. M. Dunsmore speaker. Both Douglas and Dunsmore occupied the same desk, slept on the floor under the same blanket, each with a gavel in his hand.

MacFerran finally gets around to telling us that Gov. Lewelling is a Populist governor. This is important to know because it means he’s supporting the House members who are making accusations of voter fraud. The House members start having their sergeants-at-arms arrest members of the other party.

The House was barricaded

“On the night of February 14, the officers of the Dunsmore House barricaded the doors of the House. On the morning of February 15, the members of the Douglas House, headed by their Speaker, appeared, thrust aside the outer guards, smashed in the doors with a sledgehammer, and entered and took possession. The Populists fled to a basement room where they used improvised benches.” 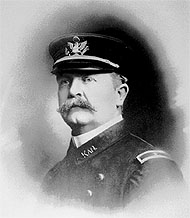 Things are getting violent! No one should be smashing doors in the capitol. Gov. Lewelling calls in the state militia and orders them to remove the Republicans from the House by force. This is where Colonel J. W. F. Hughes comes into things as the leader of the militia members. MacFerran quotes a long selection from Hughes’ own account of events.

Gov. Lewelling orders Hughes to eject the Republicans from the House, but Hughes calls the orders illegal, leaving the governor and his advisers “simply dumbfounded and speechless.” Hughes was relieved of command, but the person who replaced him also refused to follow the governor’s orders.

The governor next asked the sheriff for help removing the Republicans, but he declined as well. Eventually the governor realized he had too much opposition and not a lot of support. He sent the militia home on February 17, and the state Supreme Court ruled in favor of the Republicans on Feb 25, 1893. The Republicans took the House without any more damage to property or people.

Hughes credits himself with stopping a civil war in Kansas, and MacFerran agrees. “That this ‘Legislative War’ ended without bloodshed and the loss of life was due to the intelligence, far-sightedness, vision and great courage of Colonel Hughes,” wrote MacFerran.

This story had my heart thumping the first time I read it. All of this hit a little too close to home considering recent political happenings. Once I calmed down a little, I realized I needed more information to fully understand the situation. Who were the Populists exactly? Was there really voter fraud? What happened during the time that MacFerran doesn’t go into detail about? Were they all just camping under desks from Jan 9 to Feb 17? I set out to find out more.

The first place I turned to for more information was another article in the same issue of the Bulletin, titled “The electorate’s nightmare: politics.” I found both articles by searching the words “legislative war” in the search box in the Bulletins collection. This article gives an overview of Kansas politics and government buildings, and pages 6-10 talk about Populists and the legislative war.

Here, MacFerran gives a bit more detail about the political situation at the time. There were four political parties running in the 1890 election – Republicans, Democrats, Populists and Prohibitionists. “Democrats and dissatisfied Republicans united with the Populists,” he said. In 1892, Populists won many state offices, but (as you now know), they didn’t win the House.

MacFerren wrote, “Hughes was a Republican and not inclined to evict his compatriots.” The sheriff who refused to help was also a Republican. I’m beginning to see why Gov. Lewelling started to feel hopeless. MacFerran goes on to say, “In 1894 the coalition between Democrats and Populists split and the Republicans regained control of state government.”

Okay! Now I at least know the Populists’ timeline. They started becoming popular around 1890 but petered out pretty quickly. And they were a third (or fourth) political party. Parties other than Democrats or Republicans don’t tend to do well in American politics. Now I have an idea about why they were popular for such a short time.

Local history sources beyond the Bulletin

To further satisfy my curiosity I turned to a great complementary source for Kansas history, the Kansas Historical Society’s website. Most of the background I was looking for can be found here. Kansapedia has excellent articles on Populism in Kansas and on the legislative war. The Kansas National Guard Museum has more information on Col. Hughes who served several important roles in Topeka including Mayor of Potwin, Mayor of Topeka and Chief of the Topeka Police Department.

Interestingly, it wasn’t as easy to find information about the alleged 1892 voter fraud. I’m left wondering if Col. Hughes was the hero MacFerran makes him out to be or if there was more going on. I don’t expect to fully understand everything I read about history immediately, and neither should you. However, what I do know is there’s always more going on.

I hope you find the time to read a story or two in the Bulletins of the Shawnee County Historical Society and find something you enjoy.