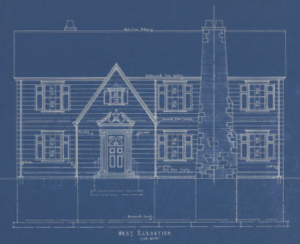 Soon you’ll be able to find blueprints of Topeka houses built in the early- to mid-20th century electronically at the library. We are currently working on digitizing the Sherwood Smith Collection of blueprints. So far half of the blueprints have been digitized and we are adding content into a database so anyone can access them. We hope to make the work public by the end of 2018. Then we will continue to add to the blueprints. 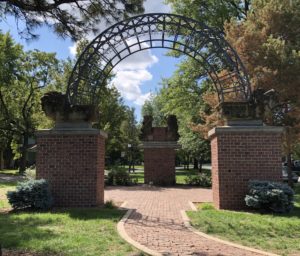 The collection was donated to the library by Raymond Sherwood “Bud” Smith II. Smith was born in 1925 and lived in Topeka all his life. He graduated from Topeka High School in 1943 and enlisted in the U.S. Army, serving with the 26th Infantry Division in northern France. Wounded twice, he received the Purple Heart, the Bronze Star and other medals for his service. After his discharge, Smith received a degree in architecture from Kansas State University and became an architect in Topeka. He married Betty Joan Bennett on September 11, 1953, and they had five children. Smith’s final project was the Chandler Library Pavilion just south of the library. He died on March 10, 2010 and is buried in Mount Hope Cemetery. Smith bought the early Topeka blueprints when they were being sold by another architectural firm and he donated them in 2003. 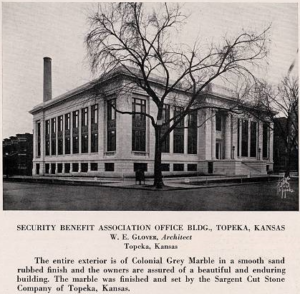 The main architect in the Sherwood Smith blueprint collection is Walter Earl Glover. Glover was born on May 29, 1889, in Terre Haute, Indiana. After graduating from university he worked for the Santa Fe Railroad from 1915 to 1918. During World War I Glover was with the architectural department of the U.S. Navy and was stationed in Washington, D. C., from April to December of 1918. In 1919 he moved to Topeka, opened an office and in November married Mary Louise Pontius. They had three children during the next six years, living in the 1600 block of McVicar Avenue (now spelled Macvicar) for the majority of their married life. For two decades he worked in several offices — in the Stormont building, on the second floor of 107 W 6th, and in the Mulvane and National Reserve buildings. When Glover partnered with Edwin E. Newcomb in the 1940s they named their business Glover & Newcomb. The firm was located at 3101 Huntoon until Glover died due to an illness on July 12, 1969, and Newcomb retired shortly thereafter. Like Smith, Glover is buried in Mount Hope Cemetery. 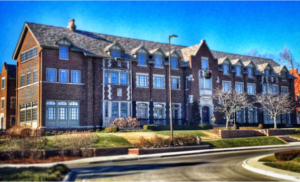 Glover’s most notable buildings in Topeka were the original Security Benefit Life Insurance Co. at 700 Harrison, the Charles M. Sheldon Community House, and the Stormont Hospital. He also designed the Chi Omega Sorority House (University of Kansas) in Lawrence.