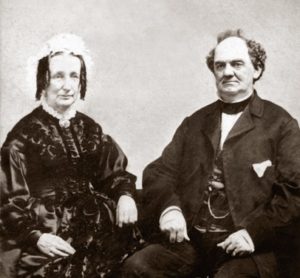 In the wake of the movie and musical hit, The Greatest Showman, starring Hugh Jackman, I was intrigued when browsing our library’s Shawnee County Historical Society’s bulletins that it listed “Mr. Phineas Taylor Barnum Visits Kansas” as a topic. The topic is a bit misleading, as it was his circus and not the man himself who showed. However, it encouraged me want to look a little more into the history of P.T. Barnum.

Mr. Barnum was born on July 5, 1810, and lived in Bethel, Connecticut. He married Charity Halley in 1829 and they had four daughters; sadly, one died before reaching adulthood. The year after Charity died in 1873, having been together for 44 years, Mr. Barnum married 24-year-old Nancy Fish, 40 years his junior.

The Greatest Showman wasn’t quite accurate (shocking, I know) in that Barnum did not actually grow up poor. In fact, his grandfather was considered one of the wealthiest men in Bethel. Mr. Barnum’s endeavors in entrepreneurship began when he was very young, barely a teenager, with selling snacks and cherry rum to soldiers. Eventually he and his family moved to New York where he continued his business adventures, including buying Scudder’s American Museum in 1841 and reopening it as Barnum’s American Museum. He retired from the museum 30 years later and launched P.T. Barnum’s Grand Traveling Museum, Menagerie, Caravan and Hippodrome with circus owners Dan Castello and William C. Coup.  In 1881, he united with James A. Bailey and James L. Hutchinson and the traveling museum became a traveling circus. When Mr. Barnum reached the age of 77, he relinquished everyday control of the circus to his partners and it was renamed Barnum & Bailey Greatest Show on Earth.

Not only was he an entertainer and entrepreneur, but a politician and philanthropist as well. He served multiple terms in the Connecticut Legislature and was elected mayor of Bridgeport in 1875. He co-founded the Bridgeport Hospital and was named its first president.

Mr. Barnum died on April 7, 1891 in Bridgeport, Connecticut, due to poor health since a stroke he suffered in 1890. As a part of his estate, he directed that a portion of each season’s show go toward the Children’s Aid Society:

“I don’t know anybody connected with [the Children’s Aid Society] but I believe in the society. To me there is no picture so beautiful as smiling, bright-eyed, happy children; no music so sweet as their clear and ringing laughter. That I have had power to provide innocent amusement for the little ones, to create such pictures, to evoke such music, is my proudest reflection… I have catered to four generations of children. I want children to remember me.” – P. T. Barnum

Sources available online and at your library

With Amusement for All by Leroy Ashby