One of my favorite things about YA novels is how often they keep me guessing, right up until the end. Here are a few books where nothing is what it seems. 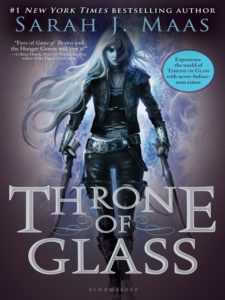 As punishment for her crimes, assassin Celaena Sardothien has lived in the labor camp Endovier for more than a year. When Prince Dorian offers her the chance to earn her freedom, Celaena doesn’t hesitate. The conditions: she must win the competition to become the new royal assassin and serve as the King’s Champion for four years. It all seems straightforward until assassins start turning up dead, and not from the assassin competition. When she starts looking into the killings, she learns there is more to the royal court than meets the eye. Celaena also learns her destiny is greater than she could have ever imagined.

This book was so much fun to read! Celaena is the perfect combination of sassy, snarky, arrogant and determined. As the first book in the Throne of Glass series, this book gives a great number of hints at her backstory that makes me want to know more. Her life in Endovier is hard and what she survived there is both hinted at and spelled out in pieces throughout the book. Celaena will do anything to stay out of there, despite her terror of the king. I’m currently reading through the rest of this series and it is so good!

If you want a fantasy series with some political intrigue thrown in, this is the book for you! 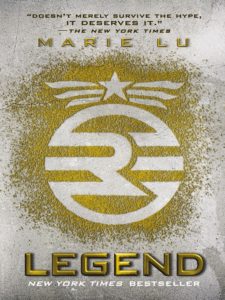 In a future where the United States has split in two and the sides are always at war, June is a prodigy. She comes from a wealthy family and she is the only person to ever get a perfect score on the test that determines much of people’s future. Everyone expects great things of June.

Day’s life couldn’t be more different. He was born on the wrong side of the tracks to a poor family and he failed the test. Day is now a fugitive. The public know he has committed numerous crimes, but don’t know he is just trying to take care of his family. When June’s brother is killed and all the evidence points to Day as the killer, their worlds collide. June is out for vengeance. But everything is not as simple as the evidence shows.

In this dystopian novel, the storyline is fascinating. Day and June are fun characters and their interaction is interesting to watch. Their easy banter back and forth feels like a genuine conversation. The relationship between these characters grows as you read and the story benefits greatly from it.

If you are a dystopian reader, you need to read this series!

Two Can Keep A Secret by Karen M. McManus 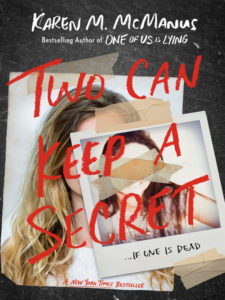 When Ellery arrives in Echo Ridge with her twin brother, she knows the town has more than its fair share of secrets. It’s where her mother fled following the disappearance of her twin sister before Ellery was born. An Echo Ridge homecoming queen was killed only five years ago. When someone begins making threats about this homecoming and a girl goes missing, Ellery wants to help. However, some secrets are meant to stay buried and someone doesn’t like Ellery trying to dig them up.

The book has an amazing storyline and a twist at the end that I definitely did not see coming. There is so much packed into this one book. There are four different mysteries wrapped up in one story:

This is a great book for those who like a mystery that will keep you hooked right up until the very end!

What are some of your favorite YA reads?