I love to read about real people, what they have accomplished and the things they have overcome, especially in their own words. Here are a few of the Young Adult (YA) memoirs I’ve read recently.

Courage to Soar: A Body in Motion, a Life in Balance by Simone Biles with Michelle Burford

I have loved watching gymnastics since I was a little girl. It’s my favorite Olympic sport and I love to see what these athletes are able to accomplish. At 2016’s Rio Olympics, Simone Biles was one of the athletes everyone heard about. This memoir is the story of her life up to this point. She writes about how she was raised, how she got into gymnastics, and the path she followed that led to her winning 1 silver and 4 gold medals at the Rio Olympics.

I was so excited to when I heard this book was coming out. I’m so happy this book lived up to my expectations. This book is well written and Simone shares many stories including her adoption, how she came to be a gymnast, and what it is like to train for and compete in the Olympics. This memoir was really fun to read. I’ve seen some interviews with her and this book has her voice. It feels like you’re having a conversation with her. Simone is one of the most accomplished gymnasts in history, but what truly made this book for me was how her down-to-earth and fun personality truly shined.

Girl on Pointe: Chloe’s Guide to Taking on the World by Chloe Lukasiak with Nancy Ohlin 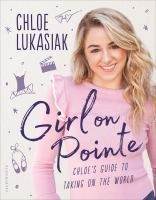 Chloe Lukasiak burst onto the scene in 2011 on the television show Dance Moms. She became a fan favorite prior to leaving the show at the end of the fourth season and has gone on to further her career in acting and dance outside of reality television. This book is her story in her own words including her diagnosis with and treatment for Silent Sinus Syndrome as well as her advice from her experience. Choloe also includes photos and short stories she has written.

I’m a closet Dance Moms fan and have been for quite a while. Chloe has been one of my favorite dancers on the show since season one. I was really sad when she left the show in season 4 and was really happy when she came back in season 7. This book is a fun read for anyone who’s a fan of Chloe or of Dance Moms. While I enjoyed reading it, I didn’t learn anything really groundbreaking. There were points in the book that were frustrating because she kept hinting at something and would then say, “…but I’ll tell you more about that later.” It made the book feel disjointed, which detracted from the fun of the book as a whole.

Fierce: How Competing for Myself Changed Everything by Aly Raisman with Blythe Lawrence

Alexandra “Aly” Raisman is a gymnast who competed as part of both the Fierce Five and the Final Five. She did what many in her sport are not able to do – compete in two Olympics. Aly had the highest of highs – representing the U.S. in the Olympics and winning medals in a sport she loves. She reveals in this book that she also experienced the lowest of lows – as a sexual assault victim of Larry Nassar.

This memoir is polished and informative, but also playful and fun. I’ve seen several interviews of Aly following her Olympic experiences and the book reads the way that she presents herself in interviews. On light-hearted topics she has fun and cracks jokes. Aly tells about how she first got into gymnastics and her journey through the sport. She writes about being part of the group of athletes competing to make the Olympic team and the relationships they forged.

On more serious topics, Aly does not sensationalize it. Instead, she presents the information factually without being over the top about it. Aly writes about her devastation in missing out on medaling in the 2012 Olympic All Around and how that motivated her to continue to compete to make the 2016 team. She tells about her experiences with Larry Nassar and how that has impacted her life. This book made me  happy for her accomplishments and devastated at her losses, which made this book come to life for me.

What are your favorite memoirs?