As you probably know, Bookstagram is a portion of Instagram that focuses on books. I’ve found many new titles and authors who I might not have discovered otherwise. Check out a few of my favorite Bookstagram reads.

The Shadows Between Us by Tricia Levenseller 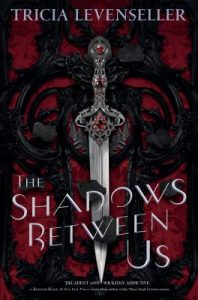 In a world where the Shadow King’s powers make him untouchable and unknowable, Alessandra knows what she wants: to marry the king, kill him and take his throne. She just has two problems: how to do it and how to fight the growing attraction she feels toward him. Falling in love was not part of the plan.

I love a good book with morally gray characters and The Shadows Between Us became one of my favorite examples. Both Alessandra and the Shadow King have aspects that make them fun to read, but also have characteristics that make them truly reprehensible. In many ways, they feel like the villains of the story. They each have a distinct lack of care or empathy for others and a single-minded vision for what they want, regardless of the consequences for the kingdom. However, they balance each other well. Her cunning, his stubbornness. His power, her desire. If you are looking for a fun read, this standalone novel delivers in spades!

If you enjoy The Shadows Between Us, check out Tricia Levenseller’s Daughter of the Pirate King, the first book in the duology that put the author on the map.

All My Rage by Sabaa Tahir 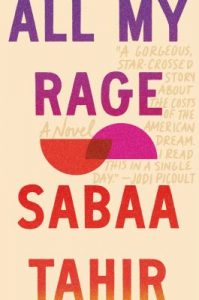 Salahudin and Noor have grown up as friends. As immigrants in Juniper, California, they understand each other in a way others just can’t. Sal struggles to save his family’s motel. He must also deal with his mother’s failing health and his father’s increasing dependence on alcohol. Noor just wants to graduate, get into college, and leave Juniper and her awful uncle behind. How do you make decisions when it feels like all the odds are stacked against you? As Sal and Noor struggle to figure out what to do, they must face the monsters in their lives, before the monsters destroy them both.

All My Rage was a book I could not put down. I absolutely had to know what was going to happen to Sal and Noor. This standalone novel is not a light-hearted read and it lists trigger warnings prior to the start, given the situations Sal and Noor experience. These characters face both tragic and beautiful experiences. You get the joys and devastation of close friendship, the hope and heartache of facing impossible decisions, and finding yourself in the midst of unimaginable struggles. All My Rage left my heart aching for Sal and Noor and their difficult choices. This book will leave you thinking long after you are finished.

If you want to read more by Sabaa Tahir, check out An Ember in the Ashes, the first book from her bestselling series of the same name.

Six of Crows by Leigh Bardugo 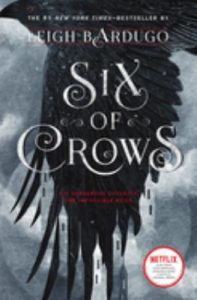 What would you risk for riches beyond your wildest dreams? When offered the chance to pull off the heist of a lifetime, Kaz pulls together a team of misfits, all with their own specialties and secrets. Kaz and his team live in a world where magic is real, it’s hard to tell who are the good guys, and survival is a feat in itself. The success or failure of this heist could change their lives in unimaginable ways. Will they be able to trust each other and work together, or will their differences rip them apart?

I fell in love with the Grishaverse from Leigh Bardugo’s Shadow & Bone series. Six of Crows let me go back into that world, but in an entirely new way. This duology can be read following the Shadow & Bone series or it can be read independently. As they take place in the same world, you are able to see how the events of that trilogy affect what happens in Six of Crows. However, the original trilogy’s characters largely stay off-stage.

The characters of Six of Crows truly shine in this duology. The relationships that develop are incredible to watch. We see old friendships tested, new relationships form, and how the decisions of an individual can affect the dynamic of the entire group. Their conversations are both witty and serious, the kind that will leave you rolling on the floor laughing or crying at the emotions they wring out.

If you enjoy Six of Crows, check out Shadow & Bone by Leigh Bardugo, the trilogy that started it all.