The Belles (The Belles, #1) by Dhonielle Clayton

In Camellia’s world, being a Belle is the best thing a woman can be and she is lucky enough to be one. Beauty is a commodity everyone wants and Belles are able to change your appearance to make you look however you want. That ability makes them loved, revered and coveted. That is not enough for Camellia. She wants to be the favorite – the Belle considered the best, most talented and is chosen to serve the royal family. However, Camellia discovers being the favorite is not everything she thought it would be and that things are far more dangerous. When she is presented with an impossible decision that puts her life and the future of her people on the line, what will she choose?

I loved this book! I could not read it fast enough. As the first book in a series, I knew it was going to end on a cliffhanger and it did not disappoint. I am on the edge of my seat waiting for the sequel. Camellia is a fun and her reactions feel natural, which isn’t always the case in books. This book wasn’t following a pattern or  a cliché. There were twists and turns I did not expect. Do yourself a favor and read this book!

Amani grew up in a world that was conquered by the Vathek Empire. She dreams of a better life. That life comes unexpectedly – Amani is kidnapped from her home and taken to the royal palace to be the body double for the hated half-Vathek Princess Maram. Amani is treated cruelly as she is secretly taught how to be Maram, but she finds joy in the presence of Maram’s fiancé, Idris, with whom she falls in love. Amani knows death is stalking her – either someone trying to assassinate Maram or a mistake that reveals that she is a double. Either one means death.

This book felt like a cross between The Prince and the Pauper and The Man in the Iron Mask. Amani may be poor, but she is loved by her family. Being ripped away from her family, sets up the plot well. Maram is initially heartless and selfish, thinking only of herself and harshly punishing Amani for the most minor of infractions. As the story progresses and Maram’s backstory is revealed, it becomes clear why she is this way. Maram becomes more sympathetic in some ways, but never comes across as  truly redeemed. I have hope she will be redeemed in book 2. 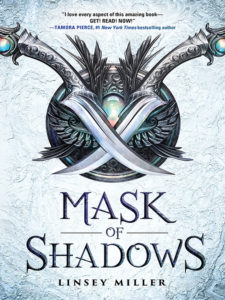 Sallot (Sal) Leon is a gender fluid thief who dreams of a better life. When Sal has the opportunity to try out for The Left Hand, the Queen’s personal assassins, the chance to get revenge is too much to pass up. The audition is a fight to the death and Sal quickly realizes how unprepared Sal is.

Sal is an intriguing character. Gender fluidity is not a character trait I have seen often in books and I really enjoyed how this book made it part of who Sal is. Sal is sharply distrusting of people in general, but that wall begins to soften throughout the book, making Sal that much more relatable.

What were some of your favorite books from 2018?