While I patiently wait for the library to get Jack Reacher: Never Go Back, let me tell you how I became an official Reacher Creature.

Once upon a time, I was bored. It was summer and I was book-less and getting I-don’t-have-anything-to-read-twitchy, so I decided to try a random title from the bestseller section at the library. That book was Lee Child’s 61 Hours and it was my introduction to Jack Reacher.

Tom Cruise in one of his more memorable performances.

Fast forward a couple of years when the internet rumors started about a possible Reacher movie. By then, I had plowed through the whole series to date, started following Child on Facebook and signed up for his newsletter.  I was definitely interested in all the movie details. Then they announced Tom Cruise as Reacher. Now if you are also a fan, you probably balked at that casting choice like I did.

Cruise doesn’t fit the image of book-Reacher, but I don’t find him completely off-putting, so I watched Jack Reacher.  I’ve watched it a couple of times since then, and even though I’ll watch them, well, when it comes to Reacher movies, I’ll be sticking to the books! 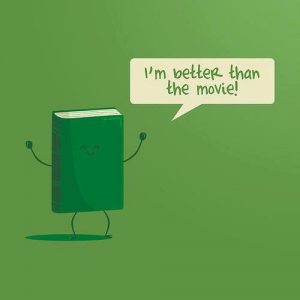 The moral of this story.

Shannon is movie-obsessed and her infatuation with the silver screen can be traced back to a single event. After helping her move into her first apartment, her mom left her with this parting remark: “Don’t spend all your money at the movies!” From that point on, thanks to her library card, Shannon continues to feed her obsession! She is the library's Database Administrator.