Here we are, my last post of the series. Formerly, I’d addressed a series that hadn’t come off as a vampire series when I started reading it, but the series was written beautifully and kept me glued to the books. Number five on my Top 5 list is set in present day New York, but has more of a Gothic feel with a hint of that bad boy romance so many women dream of.

The male leads in J. R. Ward’s Black Dagger Brotherhood series remind me of a “vampire biker guy gang” that are bonded by their brotherhood for life (they have matching tattoos to prove it). The vampires in this series bred their vigorous warriors with their strongest bloodlines so much so that they developed into a a subspecies of vampires with unique abilities such as having extra strength and utilizing mind manipulation.

What drew me to this vampire series in particular was J. R. Ward’s attention to detail when it came to setting up the society in which the Brotherhood live in aside from the day-to-day life of a civilian. Her creation of this “second layer” to the world humans reside in is amazing. She brought depth into the origin of the vampires, their enemies, their backgrounds, and their society.

It’s very helpful to have a vivid understanding of the setting the novel is placed in, that way you’re not trying to figure out where the character(s) is and what brought them to their destination.

Side note, years ago when I’d first read this series, I found a DeviantArt artist that drew realistic sketches of the Black Dagger Brotherhood characters. Anyae, the artist, also drew sketches of characters from Kresley Cole’s Immortals After Dark series and Gena Showalter’s Lords of the Underworld series. Definitely check out her art, it’s awesome! 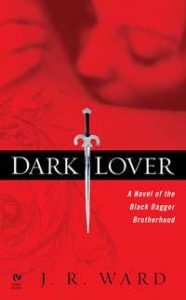 Tainted by revenge and his thirst for bloodshed, Wrath of the Black Dagger Brotherhood leads his “brothers” into a war against the slayers who murdered his parents more than a hundred years ago. Being the only pureblood left, Wrath must fight to keep his species thriving. When one of his most trusted brothers is killed, Wrath is left with the responsibility of protecting the man’s half-breed daughter.

Beth Randall, a journalist in Caldwell, New York, is attacked and abused by a few college frat boys. Both physically and emotionally traumatized, Beth now fears leaving her apartment at night and going out by herself. Soon enough, she is thrown into a world of carnage far worse than her nightmares-a world of the undead. When Wrath reveals himself to her and tells her of her heritage, Beth must learn to embrace her fate-transitioning into one of them. But, should she fear her fate that lies ahead, or the dangerous man that ignites a deep hunger from within?

All of the series I’ve suggested aren’t the only Paranormal Romance series out there. There is a wide spectrum of Paranormal Romance, but hopefully these reviews will give you a great start to a book list you’ve been wanting to make in bibliocommons, goodreads etc.

One thought on “Paranormal romance part 5”