Last week, I’d discussed one of my Top 5 Paranormal Romance series in my post Paranormal romance part 2, which centered around vampires and werewolves. Today, I’ll be reviewing a series that leans more towards the SciFi end of the spectrum.

Sherrilyn Kenyon’s The League series is set in more of a dystopian world where the government is corrupt, comrades can’t be trusted and the only way to survive is to fend for yourself. The League series is set up so that each novel follows the previous in sequential order. I have read books by authors that seem to jump all over the place when they are continuing a series. It can be a bit disorienting and makes you wonder what exactly the author had planned for the story from the beginning. However, Sherrilyn is great at keeping the plot and events paced in such a way that the story moves forward without that feeling of being jolted too far one way or another.

What’s cool about Sherrilyn’s website is that she has character descriptions for each of her series. Say you forgot who a person was in the series, you can click on the book in the series and below will be a short description of the characters. You could even search by character name if you wanted.

Born of Night by Sherrilyn Kenyon 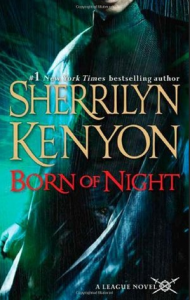 “In the Ichidian Universe, The League and their ruthless assassins rule all. Expertly trained and highly valued, the League Assassins are the backbone of the government. But not even the League is immune to corruption . . .”-Sherrilyn Kenyon

Nykyrian Quiakides, code-name Nemesis, is a half human, half Andarion League Assassin gone rogue. With The League on his trail, Nykyrian is assigned to protect Kiara Zamir, a famous dancer and the daughter of a powerful political leader. Kiara becomes a major target for assassins all across the Ichidian Universe. Being the fiery, headstrong woman she is, Kiara butts heads with Nykyrian throughout their journey. But, in a moment of weakness, Nykyrian lets down his defenses and Kiara brings life to his cold-blooded soul. She shows him that he’s not the monster he was trained to be. For Nykyrian, what started as an operation becomes a rigorous battle to keep Kiara safe.

Check in next week for a fourth review. This is part 3 of a 5 part series.