Vampire versus werewolf novels have become a popular trend for both teens and adults. I’ve noticed that the majority of them seem the same as far as plot, character development, etc. What I like about Kresley Cole’s Immortals After Dark series is that the series doesn’t just focus on vampires and werewolves. There is a variety of mythical creatures introduced in each book. She takes the traditional idea of vampires versus werewolves and creates a new and refreshing tale from it.

There are moments in her novels where she zooms out of focus from the male and female leads so that the story keeps moving forward. This is very nice because sometimes you just need a break from the drama-filled romance and want some action! Because there are so many different species in this series, Kresley Cole made an Immortals After Dark glossary as a way to refresh the reader of who and what the novel is written about. 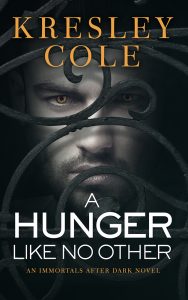 “They secretly exist alongside humans and enjoy the gift of immortality. There are hundreds of different kinds: from Vampires to Lykae, from Furies to Shifters, from the Fey to Valkyries. They walk among us, but they war among themselves. Each faction has its strengths, weaknesses, and age old prejudices against the others. Every five hundred years, the Accession, a battle for supremacy, rages. That time is now. . . .”-Kresley Cole

Leader of the Lykae Clan, Lachlain MacRieve, has been hunted and brutally tortured by the vampire horde for years. When he finds that his destined mate for life is partially a vampire, disgust and hatred burn within him as his ensuing attraction for her takes hold. Timid Emmaline is a half Valkyrie/half vampire with the power to calm the savage beast Lachlain can become.

On a journey to find the truth about her deceased parents, Emmaline Troy is taken down another path when she meets an intimidating Lykae. In an instant, she becomes a Lykae’s mate and is forced to live with him in his Scottish castle passed down from his ancestors. As her fear of the Lykae falls through the cracks, Emmaline finds herself drawn to the magnetic pull of Lachlain’s presence and surrenders to her dark desires.

But, when a malicious figure from her past resurfaces, will their lustruous chemistry develop into a love that can make a cocky warrior fall to his knees in time for the tender maiden to become the fighter she was meant to be?

Visit again next week for a third review. This is part 2 of a 5 part series.

One thought on “Paranormal romance part 2”