Not long ago, writers who wanted to publish their work had few options. The best scenario was to mail out hundreds of queries and wait many months or even years for a possible bite. Those who didn’t want to endure the wait or rejection could pay a vanity press to publish their work. With pay-to-play publishers, authors had little hope of a return on their investment. Writers now have options more tailored to their publishing needs thanks to changes in the industry and in the way we communicate with one another.

Jennifer Brown knew nothing about publishing. She wanted to learn.  Brown spent the time she wasn’t writing to study the craft and the business of writing. She actively submitted her work, hoping someone would show interest. And she kept writing. 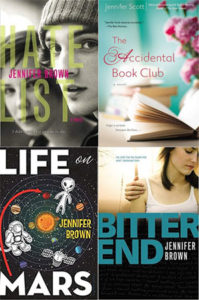 “I would move on to my next project,” Brown said of the time after she submitted her work. “Come to think of it, that’s how I still work. Always looking forward, always moving ahead, always trying new things.”

Brown wrote four novels—all women’s fiction—before publication came into view. “I worked and submitted for six years before I found an agent,” she said. “It was another three years before I saw one of my books on the shelf.”

That book was Hate List, not one of the four novels Brown had previously written, but a new young adult novel. Another four years passed before she saw one of her women’s fiction stories published. Brown added, “For those keeping score, that would be 13 years total.”

Despite the long wait, Brown (who also writes under the name Jennifer Scott) has published more than 15 titles for adults, teens and children during the last decade. Her novels have earned several acclaims including an ALA Best Book for Young Adults, a School Library Journal Best Book of the Year and a William Allen White Children’s Book Award.

Theresa Hupp chose another path. She spoke with agents and publishers at writers’ conferences, but decided that traditional publishing was not for her.

“I came to writing fiction later in life,” Hupp said. “I didn’t want to wait several years before seeing my books in print.” She and a few writers in the Kansas City area formed a group called Write Brain Trust. “We helped each other learn about publishing and marketing our books as independent authors.”

Hupp had two primary reasons for self-publishing. One was a desire to publish on her own timeline. The other is to have complete control over the content of her work. It’s a decision she is happy to have made.

“I’m so glad my parents saw my first novel,” Hupp said. “If I’d waited for traditional publishing, they would have missed holding my first novel.”

Despite the differences in the paths they chose, both paths required hard work. From concept and first draft, through publication and promotion, Hupp and Brown never stopped to worry about the rejection they might encounter. They believed it would happen and they didn’t quit, even after they’d reached the goal.

Jennifer Brown and Theresa Hupp will share more about their experiences with publishing during a special panel discussion June 18 from 6:30-8:30pm in Marvin Auditorium BC. They’ll be joined by former literary agent and author Jennifer Haskin and Meadowlark Books founder Tracy Million Simmons.